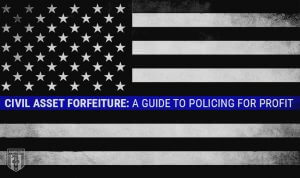 Picture this: You’re driving home from the casino and you’ve absolutely cleaned up – to the tune of $50,000. You see a police car pull up behind you, but you can’t figure out why. Not only have you not broken any laws, you’re not even speeding. But the police officer doesn’t appear to be interested in charging you with a crime. Instead, he takes your gambling winnings, warns you not to say anything to anyone unless you want to be charged as a drug kingpin, then drives off into the sunset.

This actually happened to Tan Nguyen, and his story is far from unique. It’s called civil asset forfeiture and it’s a multi-billion dollar piggybank for state, local, and federal police departments to fund all sorts of pet projects.

With its origins in the British fight against piracy on the open seas, civil asset forfeiture is nothing new. During Prohibition, police officers often seized goods, cash, and equipment from bootleggers in a similar manner to today. However, contemporary civil asset forfeiture begins right where you’d think that it would: The War on Drugs.

Tonight on the US national news, it was announced that a new form of heroin that is 10,000 times stronger is now hitting American streets. You read that correctly – 10,000 times stronger than plain heroin! Is that even possible? Apparently so, and where was the story from? The brutal inner cities of Los Angeles […] I find the logic of this nearly unassailable. Just as there’s no inherent reason why the alcohol trade should be violent, there’s little inherent reason why the market for other intoxicants should be. Give people the opportunity to work within the confines of the law — and to enjoy its protections — and the worst sorts of behavior become unnecessary. Deny them those confines and protections, and we quickly descend into a petty Hobbesianism that drives out all the nice guys and rewards the worst.

My father is visiting us here in Schenectady. While my he’s traveling, my mother is staying with my sister in Gettysburg. As some of you may know, my mother has some health problems, and as a result, is on serious pain medications.

Last night, my sister posted the following on Facebook: To my wife’s chagrin, I spent part of the long weekend in an email argument with a libertarian friend about whether cops and the War on Drugs are to blame for the violence in our culture.  Then, just yesterday three interesting articles spoke to the issue: First, Harvard sociologist Orlando Patterson explains “How Sociologists Made […] So, a little bit about me. I’m a Gen-Xer and I have Attention Deficit Disorder. I’m 34, just a little too old, so I missed that fun trend back in the ’90s of doping up kids with Ritalin if they misbehaved. I was 33 when I was diagnosed. Preview Open

Who Are You to Question Your Savior?
Dr. Bastiat · 20 Likes