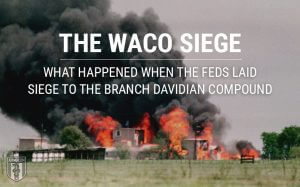 “The record of the Waco incident documents mistakes. What the record from Waco does not evidence, however, is any improper motive or intent on the part of law enforcement.”

The siege of the Branch Davidian compound in Waco, Texas, is an important event in American history because it directly led to one of the biggest terrorist attacks on American soil – the bombing of the Oklahoma City Federal Building. It’s not necessary to defend this act of terrorism to understand why the entire freedom movement of the time was so incensed by it. Indeed, it stood as a symbol of federal overreach and the corruption of the Clinton Administration.

It’s unlikely that there is a single federal alphabet organization less popular among the readership of this website than the Bureau of Alcohol, Tobacco and Firearms. These are the people who gave us both the Siege at Ruby Ridge and the Siege of Waco. What’s more, they may well be engaged in an entirely unconstitutional […]