Coming out of the 2020 election and voter fraud allegations, NTers have argued that Republicans have sometimes joined with Democrats in rejecting the voting allegations. They assert that these are strong reasons to reject the claim that fraud could have changed the presidential election. My wife worked for the Illinois GOP from January to March […]

We are all aware of the Dems bill to “overhaul” voting in ways that they think will benefit them; primarily by legalizing more opportunities for voter fraud.  They take this path secure in the belief that the GOP will not cheat, at least not on the level they will.  While I think we should continue to oppose it for all the reasons already stated, we should also prepare to exploit all the opportunities this will create.  The California GOP recently started following the Dems in using vote harvesting (election cycles behind, but better late than never).  It is believed to have played a helpful role in some of the victories last November by various GOP Congressional candidates.

We need to stop being victims.  Yes, we want the traditional safeguards back in place.  But to do that we need to win electorally, convincingly.  And win with candidates who have the backbone to stand up to the Press/Dem cries of “foul” when we replace their crooked laws.  And then prepare to take on the lefty judges who try to prevent the implementation of reforms.

Those of us who are skeptical about the 2020 presidential election have been told to shut up. The results were certified so they must be valid. Our institutions are sound. Sure, there may have been some intimidation in places like Michigan to get it certified, but pay no attention to the man behind the curtain […]

If Trump felt like doing so, might he convene some sort of bipartisan presidential commission/fact-finding group dedicated to an inquiry into, and rectification of, major vulnerabilities in America’s voting processes? “Bipartisan,” I say, because in 2016, many many Democrats (both in the media and in office) claimed that the election was “hacked.”  In 2020 (skipping […]

For a long time, the media has protected itself by using the word alleged even when it was clear that a statement was true. In 1998, it got so bad that when they were talking about the age difference between WJC and Monica, P.J. O’Rourke quipped, “The alleged age difference.” But there’s no alleged President-elect. […]

Some people on this site are downplaying the risk from voting fraud. I thought it would be useful to review the notorious 1948 senate primary in Texas. Lyndon Johnson narrowly lost a previous primary in 1941. The 1948 race was an all or nothing gamble for his political ambitions. Six days after the election a box was discovered with the ballots that won him the race. It’s surprising that Prescott Bush didn’t congratulate his opponent the day before on his victory. But the win resulted in a sure victory in the fall elections given the democratic dominance in Texas at that time. Without the fraud, Johnson would not have become President. There probably would have not been a war in Vietnam or the Great Society programs. Future Supreme Court Justice Abe Fortas helped ensure that the ballots were not scrutinized. Yes, history changed in the 20th century as a result of this fraud. Let’s help ensure that doesn’t happen this year from last week’s fraud. 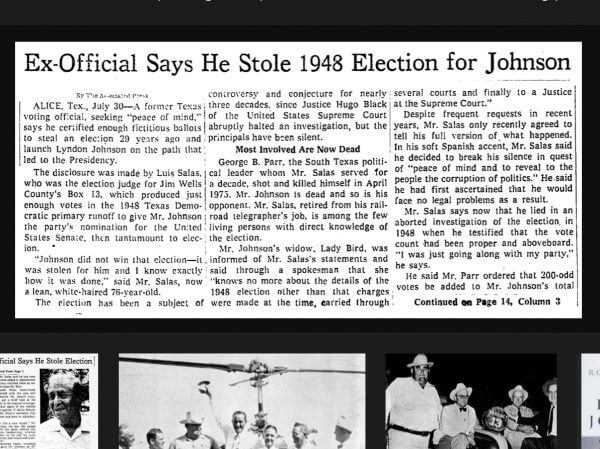 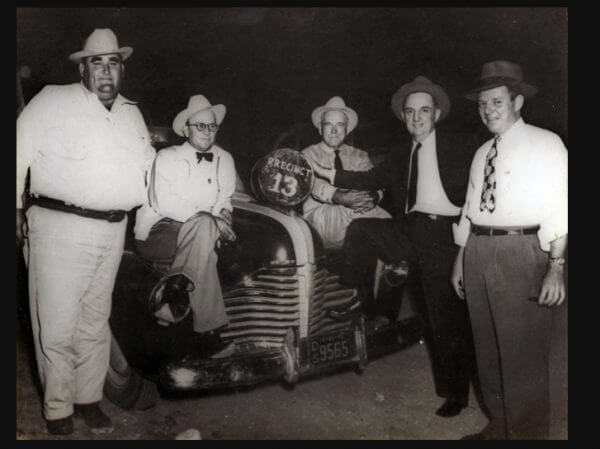 The FBI and DOJ are still infested with enemies of the Republic and the Constitution they falsely swore to defend. Little more than a month before a momentous general election, with early voting already underway in many states, the FBI and DOJ are busy looking away and throwing up smoke about foreign interference and voter suppression, a DNC talking point to cover real fraud. The FBI and DOJ know the true enemy of free and fair elections has always been within, not external. They have assiduously avoided the basics of busting upvoting fraud. We know this for a fact because Project Veritas had no problem getting a Democrat operation, complete with a carload of paid for ballots, a party operative, and voters saying on video they were paid to hand over their ballot.

Project Veritas documented federal election fraud in Ilhan Omar’s district. We can help across the nation, putting pressure on the Feds now. If you or a friend are in or around senior communities, low-income communities, or college communities, keep an eye out and alert others to do the same with their smartphones.

Checked out Google News and saw a link to this Washington Post article: “Trump supporter charged with voting twice in Iowa.” Apparently an Iowa woman cast both an early ballot and then another at a satellite voting location. She’s been booked and charged with first-degree election misconduct. Glad they caught her, and it is good […]

An acquaintance of mine, and an immigration lawyer, contends there is “no evidence of non US citizens voting” in U. S. elections. Is he correct? Preview Open

First Illinois, now Maryland . . . Funny how these “miscalibrated” voting machines only change votes for Republicans into votes for Democrats.  I really wish we would go retro, and use physical devices for tallying votes – paper ballots, punch cards, whatever – so as to prevent electronic hanky-panky such as hacking or “calibration errors” […]