This week on JobMakers, host Denzil Mohammed talks with Jeff Farrah, General Counsel at the National Venture Capital Association, a D.C.-based group that advocates for public policy supportive of American entrepreneurship. They discuss why we should adopt reforms such as a “start-up visa,” allowing immigrant entrepreneurs to stay here in America so we can benefit from the potential job creation, innovation, and economic dynamism of newcomers who graduated from our universities, worked for American companies, or simply have a viable plan to start a business. Jeff knows that immigration and entrepreneurship go hand-in-hand, that immigrants are twice as likely to start a business, and that it’s not just big policy changes that could move the needle, as you’ll learn in this week’s JobMakers.

Jeff Farrah serves as General Counsel at NVCA, where he advocates before Congress, the White House, and agencies for pro-entrepreneurship policies and leads in-house legal matters for the association, including management of the NVCA Model Legal Documents. He loves working at the intersection of venture, public policy, and the law. Jeff concurrently serves as Treasurer of VenturePAC, the political action committee of NVCA. Prior to joining NVCA, Jeff was Counsel to the U.S. Senate Committee on Commerce, Science, and Transportation where he advised Chairman John Thune (now Senate Majority Whip) and members of the committee on technology, telecommunications, and Internet policy. His committee perch gave him an invaluable perspective on how policymakers think about technology and its impact on American life. Previously, Jeff served as General Counsel to U.S. Senator Scott Brown, serving as Brown’s top legal and policy advisor on a variety of issues. During the 2012 presidential election, Jeff was a member of Governor Romney’s Trade Policy Advisory Committee. Prior to the Senate, Jeff was an attorney at a leading Washington, DC law firm for international trade matters. His trade law experience includes World Trade Organization Dispute Settlement and trade remedies cases before U.S. agencies. A native of southern California, Jeff earned his Bachelor of Arts degree in Political Science from the University of California, Santa Barbara (Go Gauchos!) and his Juris Doctor from Seattle University School of Law. Jeff was a Visiting Student at Georgetown University Law Center. 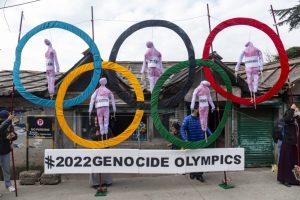 The XXIV Winter Olympics open in Beijing, China, on February 4, less than 14 years since they hosted the 2008 Summer Olympics. The torch relay began from Olympia, Greece, on October 18th. Residents of Xinjiang Province, home of gulags, re-education camps, and other forms of genocide against Uyghur Muslims, will miss out on it.

It didn’t have to be this way. When the International Olympic Committee voted in 2015, it had a choice. Beijing won out over Almaty, Khazakstan, by just four votes, 44-40, after Norway, the early favorite, withdrew their bid over embarrassing demands made by the IOC. It is the third consecutive Olympics held in Asia (the other two were Japan and South Korea).

This week on JobMakers, Host Denzil Mohammed talks with Dr. Bernat Olle, co-founder and CEO of Vedanta Biosciences, about his journey from Catalonia, Spain, to Cambridge, Massachusetts, where he continued his Chemical Engineering studies at MIT. Navigating the complex immigration system while seeking purpose in his career, he eventually found his calling and was lucky enough to remain in the U.S. to see it through: designing a new class of medicines to modulate the human microbiome. They duscuss how everyone wins when foreign-born talent is welcomed into vibrant, entrepreneurial ecosystems like those in the U.S., when they’re able to collaborate with others from the U.S. and around the world and come up with incredible ideas to benefit all people. Bernat also expresses a sense of kinship with immigrants far removed from the labs and boardrooms. He knows that the same aspiration – opportunity – attracted those who came here with nothing but a suitcase and a dream, as you’ll discover in this week’s JobMakers.

Dr. Bernat Olle is a co-founder and Chief Executive Officer of Vedanta Biosciences. He has been a member of the founding teams of several companies of the PureTech portfolio and served as a member of the Board of Directors of Vedanta Biosciences and Follica Biosciences. In 2013 Dr. Olle was named “Innovator of the Year” in MIT Technology Review Spain’s “Innovators under 35” awards. He also received the 2019 Barry M. Portnoy Immigrant Entrepreneur Award from The Immigrant Learning Center. He completed his doctoral work at the Chemical Engineering Department at MIT, where he developed a novel method for large-scale bacterial culture. During his graduate work, Dr. Olle was awarded the “la Caixa” fellowship. Dr. Olle received his B.S. in Chemical Engineering from Universitat Rovira i Virgili, in Catalonia, his M.S. and PhD. in Chemical Engineering Practice from MIT, and his M.B.A. from the MIT Sloan School of Management. He has published his work in journals including Nature and Nature Biotechnology.

My Family and the KKK
Chowderhead · 16 Likes