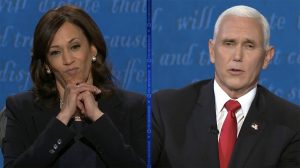 After watching the vice presidential debate and seeing Governor Mike Pence stand up to Senator Tim Kaine’s abortion sophism, I prepared myself to flip from NeverTrump to Anti-Hillary-Enough-To-Vote-For-Trump. Pence did a serviceable job calling out the inconsistency of Kaine’s position, but Matt Walsh really, really took the wood to the idea that one can be a Christian and support murder of the unborn.

Leave it to modern day Christians to argue that a God who chose to physically exist inside a woman’s womb for nine months “didn’t have anything to say about abortion.” Abortion is perhaps the modern “social issue” about which he had the most to say. God was an unborn child. Period. I shouldn’t need to move from there to quoting Jeremiah and the Book of Psalms. God was an unborn child. Did you get the message, Tim Kaine? It’s not that hard to understand. It’s time for pro-choice Christians to choose between the abortion industry and their faith. Clearly, Jesus did not intend to leave them any room in between.