Luther Abel joins the podcast to tell us why he joined the Navy, and to speculate about why fewer young people are interested in joining the U.S. military these days.

“Man is it hot here, how close to the equator are we…?”  I thought, my attention span fluttering as I sat in this grossly hot classroom, sweating through my clothes pushing into the fourth hour of discussing American/Malaysian cooperation.  I was in a planning conference; we were preparing for a joint/combined military exercise later that year near Melaka, Malaysia (roughly ‘93).

This was all part of a larger strategy known as Theater Security Cooperation that applies various DoD programs and activities in coordination with the Department of State, encouraging ($$$) and enabling ($$$) countries and organizations to partner with the US to achieve strategic objectives. This particular effort was part of Pacific Command’s (PACOM) strategy to keep South East Asia stabilized. Now known as Indo-Pacific Command (INDO-PACOM) to show we are serious about not just the Pacific but across the Indian Ocean as well. I spent most of my military career out there and I thought that was understood. The name makes me cringe. The change in letterheads and signage alone must have cost millions.

With the announcement that President Trump wanted to bring up to one-third of US troops from our permanent bases in Germany, Rep. Liz Cheney tweeted out the following: On this episode of the AEI Events Podcast, Mackenzie Eaglen sits down with Secretary of the Air Force Heather Wilson. From cutting-edge hypersonic missiles to humble propeller-driven attack aircraft intended for counterterrorism operations, Secretary Wilson previewed experimental programs that will provide tomorrow’s airmen with the capabilities they need to fly, fight, and win. The secretary also articulated her concept of “defendable space” meant to revolutionize how the Air Force acquires and operates systems for use outside the stratosphere.

Asked to reflect on the most important lesson from her storied career, Secretary of the Air Force Heather Wilson noted that nothing is more critical than living by a consistent set of values. In this AEI Events Podcast, Rep. Joe Wilson (R-SC) joins AEI’s Thomas Donnelly for a discussion of the ongoing military readiness crisis and what Congress can do to begin addressing it. The chairman of the House Armed Services Committee Subcommittee on Readiness, Rep. Wilson describes how the series of cuts to the national defense budget under President Obama severely damaged the US military, eroding its ability to perform all the tasks we ask of it.

Rep. Wilson speaks about the serious threats facing the country, focusing in particular on Russia, North Korea, and China, and the importance of US leadership in facing those challenges. Consistent American engagement in foreign affairs, he emphasizes, enabled democracies and free markets to flourish in Central and Eastern Europe, South America, and around the world, but that peace and prosperity is possible only through American military superiority. To reclaim and sustain that superiority, Rep. Wilson calls for Congress and the administration to support the higher defense budget proposed by the chairmen of the House and Senate Armed Services Committees. With persistence and steady leadership, he believes that the US can rebuild its military.

My husband has an allergy problem. Every season he coughs and sneezes, no over the counter meds work. He ends up at an emergency care clinic begging for antibiotics twice a year, when it turns into an infection. Only this past year, it never cleared up. A check up and referral to allergist is coming, […] Via The Army Times, there was much joy in Epping, NH last night:

Audible has just released my latest narration, “Exporting Security” by Derek S. Reveron. The book covers the changes in US military mission, culture and performance since the Cold War. This is a revised edition, just published this year, so it goes right up through the current administration. Reveron teaches at the Naval War College and has been […] “Color Guard at Fort Belvoir” by US Army Corps of Engineers, via Shutterstock.

Once again, the Obama administration is kicking our military in the groin. This time it’s a Special Forces Green Beret, SFC Charles Martland. You see Martland confronted an Afghan Commander who had raped a boy and then beat the mother for reporting the rape. When confronted, the commander tried laughing it off. Martland and his team leader […] 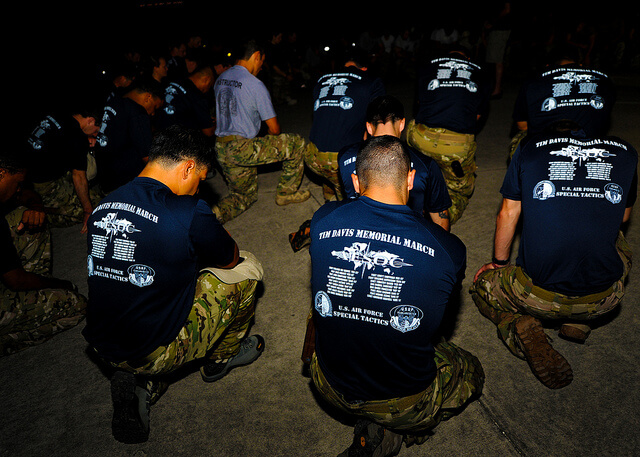 As many are aware, the Air Force became the last branch of the military to make “so help me God” optional in the oath of enlistment this past week.

A legal review of rules that required the phrase occurred after the American Humanist Association (AHA) threatened to sue on behalf of an atheist airman. The unnamed airman at Creech Air Force Base in Nevada was denied re-enlistment Aug. 25 after crossing the phrase out of the oath.