We’re in a period of political upheaval, and it’s been brewing for decades. That much is obvious to Americans. It is also a growing global phenomenon.

There are scores of examples that the mainstream media largely ignores. The recent uprising in Sri Lanka was spurred by harsh “green energy” policies that toppled a government. The farmer uprising in The Netherlands, Europe’s largest exporter of food, over similar green energy policies. In all, dozens of protests from Spain to Canada over various Covid-related and “climate change” diktats continue to fester.

Again. Unlike America, where the courts and RepubliCAN’Ts collude with Democrats to corrupt our elections, with the intent of keeping the wrong kind of voters from actually imposing accountability on the political class, the United Kingdom has well-run honest elections. Their off-year elections, after the 2019 general election that shocked the world, were supposed to be in 2020, but were postponed because of “COVID.” As a result, this years elections plus 2020 contests came together in an unusual confluence that looks closer to a U.S. midterm election. It became the first change for the whole voting public to render judgment about all that has happened over the past year. It turns out that Labour is still found badly wanting and Boris Johnson has not been deemed worthy of reproach for his handling of the pandemic. The votes are not all counted, and the full results will not be known until some point on Sunday, yet the rough outlines are clear.

Yes, Labour managed to hang onto power in the Welsh legislature, and Sadiq Khan hung onto the mayoralty of London against a dynamic younger black Conservative man, Shaun Bailey. That, however, was a disaster for a party thrown out of so many seats about 18 months ago. Changing the face of the party fooled no one. The great British public was having none of it. Yes, the Scots may make a play for some sort of independence, most likely to extort England against defending national sovereignty against Eurocrats. Yet the SNP’s ambitions must be checked by the cold reality of a British public that is rejecting the leftist elites.

While Brendan O’Neill of Spiked and Melanie Phillips could be counted on to hammer home what they believe to be Labour and the cultural elite’s obstinate tone-deafness, it was a Labour MP, Khalid Mahmood, who offered the hardest, clearest condemnation of the Labour Party.

Back before the election in December James and Toby worried about their fate under a Corbyn Government. Now the Cultural Revolution is back with a vengeance and the worries return, particularly if more left-wing college graduates lose their jobs.

Also, should we shut down The Guardian because of its links to the slave trade and the row created by Boris’s new race relations tsar. While British Prime Minister Boris Johnson first bowed before the altar of the NHS, above and before the police and fire services, and placed the British military members* and their families last, as has been true since Kipling wrote “Tommy,” it is remarkable that he called Christmas for what it is, a celebration of the birth of Jesus Christ, and especially called attention to the worldwide plight of persecuted Christians, many celebrating Christmas in prison cells! This prime minister, with his clear governing majority, pledged “as Prime Minister, that is something I want to change.” He also offered timely and sage advice to everyone around the world, urging domestic peace and goodwill: “Try not to have too many arguments with the in-laws, or anyone else.”

Here is the official transcript:

The libtards in the UK have a strong preference when it comes to knife crime. They want your throat to be slit rather than for you to be stabbed.  How will they legislate that preference? They propose to ban knives with points. Preview Open 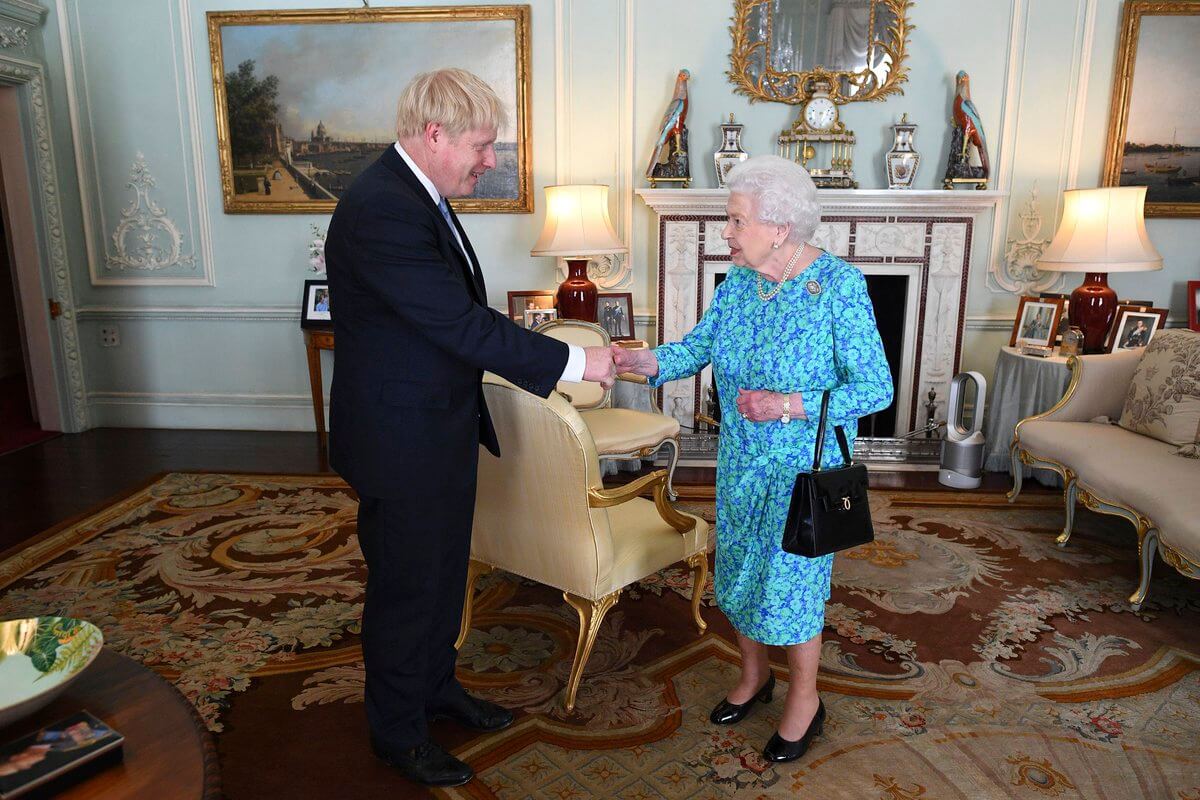 Boris Johnson has entered Downing Street as prime minister, replacing Theresa May after an audience with the Queen at Buckingham Palace. The new Tory leader was asked to form a new government after Ms May ended her embattled three-year premiership with a speech outside Number 10. After addressing the nation on the steps of Downing Street, Mr Johnson will now begin the process of assembling his cabinet, with prominent Brexiteers lined up for promotions. Three pro-EU ministers, Philip Hammond, Rory Stewart and David Gauke, all resigned before he took office.

Some years ago, I knew Piers Morgan as an obnoxious British journalist on American television. I rarely watch TV, so I mostly was aware of him when he outraged conservatives by his theatrical posturing over one issue or another, such as Newtown.

However, as a faithful reader of the Daily Mail, I’ve enjoyed a number of his columns since he returned to the UK, defending his old friend President Donald Trump, such as this one. The president gave Mr. Morgan an interview on Air Force One before departing the UK for Germany yesterday that many of you will find interesting. Here’s the interview, and I’ve also included a video from morning talk in the UK arguing over the president’s visit, in which Mr. Morgan argues that the protests against the American president should not be so puerile and outraged, when visitors like Erdogan of Turkey or the crown prince of Saudi Arabia receive little to none.

Richard Epstein uses the recent push for independence in Spain’s Catalonia region to consider the question of when separatist movements are justified in pursuing independent statehood—and how they should go about it.

In this AEI Events Podcast, leading experts join AEI’s John R. Bolton and Desmond Lachman to discuss the challenges and opportunities of Brexit after the United Kingdom elections. Ambassador John R. Bolton, senior fellow at AEI, discusses the EU’s “secular theology,” which argues the EU has brought peace and prosperity to Europe. David O’Sullivan, ambassador of the European Union to the United States, disagrees, asserting that the EU had allowed peaceful resolution of conflicts. He highlights that defining a post-Brexit relationship between the UK and the EU will take several years.

Adam Posen, president of the Peterson Institute, addresses the negative economic shocks the UK will face if, because of Brexit, it loses tariff-free access to Europe, its largest trading partner. Hugo Gurdon, editorial director of the Washington Examiner, pays tribute to the EU as a project for peace but argued that the UK’s history of constitutional stability and relations with the world, rather than Europe, means Brexit was the right choice for the UK. Finally, AEI’s Desmond Lachman emphasizes that the EU, especially the eurozone, faces severe economic problems associated with the risk of a breakup. It’s somewhat satirical of course. Ridley says in The Spectator that Americans might understand why so many in the UK want out of the EU if an AU (all American nations north of the Panama Canal) were formed, and the US was contemplating membership. Most Americans I know think Britain would be mad to leave […]

Leading Republican Presidential candidate Donald J. Trump has not only become somewhat a phenomenon here in the US during the 2016 election, but across the pond he has stirred over a half a million people to sign an online petition banning him from their country.

On Monday, Members of Parliament held a hearing on whether to block the former reality TV star from entering the United Kingdom. This is a pure music post, my apologies. I don’t know what to think of what’s happening at the debate on Thursday. I was just informed that Kinky Friedman didn’t make the cut.

I went to see a documentary on one of my favorite bands, The Damned, this week. It’s called “The Damned: Don’t You Wish We Were Dead.” They were 1977 birth-of-punk U.K. contemporaries of the Sex Pistols and the Clash. The point of the doc was that most people know the Sex Pistols and the Clash, but your average music fan has just never heard of the Damned, and they suffered from that fact. It explained a lot of their woes.

The Damned are much cooler than those other two bands for aficionados, but for the casual observer of punk rock, I was wondering if the director’s premise was true. I’d say there is no better place on earth to test his theory than right here on Ricochet, so here goes: How many people out there who are familiar with the Sex Pistols and the Clash, are completely unfamiliar with The Damned?

As far as I can tell, this is not a delayed April Fools’ Day prank, a parody, or a joke but a straight news story. (If I’m wrong, correct me–please.)

TAUNTON, UK, April 2, 2015 – A judge has convicted and fined a street evangelist for quoting one verse of the Bible that condemns homosexuality on the streets of Taunton, Somerset — instead of quoting another verse.