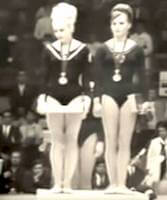 I started writing this in the hours after American gymnast Simone Biles withdrew from the Olympic women’s team competition. Then I let it sit to see what the rest of the story might be. From the beginning, I found that Simone Biles, at age 24, was on track to be the second oldest women’s all-around Olympic champion. This naturally led to the oldest modern Olympic women’s all-around gymnastics champion, who won at the age of 26 in Mexico in 1968. The Czechoslovakian Věra Čáslavská, one of only two two-time all-around Olympic champions in women’s gymnastics, performed under far more real pressure, with far more real courage, facing far more real consequences than any athlete in Tokyo.

Simone Biles approached the 2020 (2021) Olympic Games as the defending all-around champion and the heavy favorite to repeat. She performed well in events leading up to Tokyo. Indeed, she landed a new, very difficult move on the floor exercise months before these Olympics.

The cold is biting, even through layers of linen, chirimen, and silk. Vender’s cries fill the air, offering up soba noodles, natto, charred eel, and chazuke, an accent to the everpresent flow of the Sumida River. Down an alley in the artisan’s district, lantern flames illuminate a broad shoji paper door, allowing the tile and […]

Story Hour with Bridget Phetasy is a segment where Bridget reminisces with cousin Maggie and tells stories explaining who she is and how she got here. Full transcript available here: WiW78-StoryHour5-Transcript

Because Bridget’s globe-trotting wanderings are too much to cover in just one Story Hour, here’s part 1 of her international travels. Covering the first time she ever left the country and why she had to spend the whole trip with Desitin all over her face, traveling through Canada in the trunk of a car as a teenager, almost getting stranded in Mexico, and how she wound up in Tokyo and Barcelona. Frankly, it’s a miracle she’s still alive and she credits an acutely developed “spidey sense” for narrowly avoiding several dangerous situations.