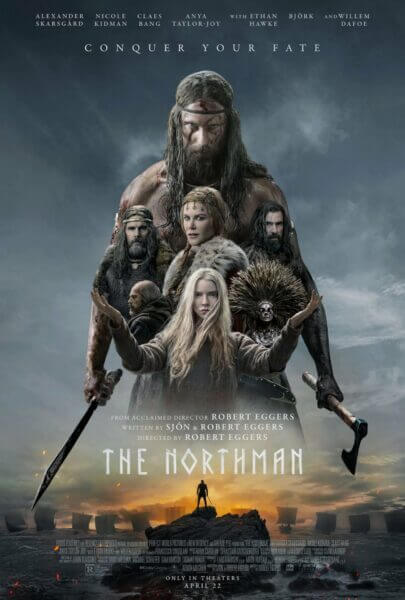 While not dispositive as to a movie’s quality, when talking about historical dramas it’s interesting to ask whether the film’s subjects would appreciate their on-screen portrayal. Rather than being a movie vikings would enjoy, The Northman is better described as a movie vikings would make. It is not a straight telling of the lives of northern Europeans during the Viking Age, but a tale molded by their aspirations, their ideals, and untouched by modern mores. In an early scene, our hero Amleth (Alexander Skarsgård) raids a Slav village after which the surviving women and children are rounded up to be made slaves or hoarded into a shack and burned alive. This is not a world of universalist Christian morality. It is a world of honor, social rank, and birthright.

At the beginning of the film, young Amleth (Oscar Novak) is twelve, old enough to be initiated as a man and successor to his father King Aurvandill (Ethan Hawke). When his uncle Fjölnir (Claes Bang) kills Aurvandill, Amleth narrowly escapes the same fate and vows revenge. He is taken in by some passing vikings and raised to be a berserker. After the aforementioned raid, he gets wind that Fjölnir has been exiled to Iceland. He brands himself like a slave and boards a slaveship headed to Iceland. On the ship, he meets Olga (Anya Taylor-Joy) whose cunning will be of great help in exacting his vengeance.

A he-witch (Ingvar Sigurðsson) instructs him to obtain a magical sword. Amleth’s duel against the animated corpse guarding the sword is one that will go down in cinema history. It is not alone as far as rousing action scenes. With his previous two films, The Witch and The Lighthouse, director Robert Eggers built a reputation for ponderous movies that are near impenetrable for general audiences. The Northman, while an Eggers film to the bone, fares better chances with the moviegoing public. The action is visceral, expertly choreographed, and frequent enough to stave off boredom for more impatient viewers.

Roundup from Here & There
BDB · 20 Likes

A Slow Death from Bad IT Infrastructure
Dr. Craniotomy · 21 Likes

A De-Transitioning Individual Sounds the Alarm on the Conversion of School Children to the Opposite Sex
CarolJoy, Not So Easy To Kill · 16 Likes

A Tale of Two Search Engines
The Ricochet Audio Network

Your Jazz Break of the Evening…
The Ricochet Audio Network