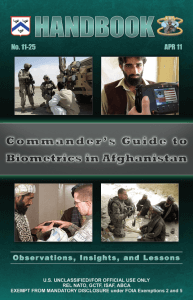 I was vaguely aware of the extensive biometric data collection by American forces in Afghanistan. I never imagined it was so terribly efficient. Reportedly, up to 80% of the Afghan population, presumably adult population, have been captured with iris, fingerprint or DNA data and some level of notation about the individual. This was supposed to help deny Taliban agents access to villages, as they would pop up as strangers, not in the system as locals. The data became a basis of arrest, trial, and conviction of bombers or anyone who got his fingerprints on a piece that went into a bomb. AND. This information was never safeguarded, never compartmentalized, never rigged for U.S. remote data destruction. This is an intelligence and human catastrophe well beyond any managed by any of our alphabet soup agencies in the Cold War. The biometric data may well prove more harmful than all the tradition military equipment we left behind, written about and depicted in cool graphics.

Now the Taliban’s most sophisticated wing, the Haqqani Network, backed by Pakistani ISI intelligence advisers, is going door to door in Afghanistan. We may have abandoned thousands of hand-held portable scanners, with which everyone can be checked against the master database, that we allowed the Afghan “national” government to nominally control, in a Kabul office now in the hands of the Taliban and their Pakistani senior partners. The results are terrifying and were entirely foreseeable by those running the program right up to the final days.

The massive database and query program should have been rigged with a self-destruct routine that should have been executed at least the night our senior military brass directed the abandonment of Bagram Air Base. Public Intelligence, an independent watchdog organization with original reporting cited in major world media stories, wrote about the program, without flagging the massive risk, in 2014. Public Intelligence writers’ main concern in “Identity Dominance” was the apparently unchallengeable, but uncorroborated, testimony a fingerprint had in a young Afghan man’s trial for conspiracy in a bomb-making plot.

The Good Intention Trap Make 2016 a good year to avoid being duped by good intentions. I wasn’t looking very hard when I recently fell into a good intention trap. Preview Open

A friend sent me an AEI article positing a needed strategy for combating the Daesh and al Qaeda. The article is A Global Strategy for Combating al Qaeda and the Islamic State, and it can be seen here. What follows is my top-level critique of the piece; I’m deliberately eliding the likelihood of seeing it […]

This link is but a many of calls to arms by law enforcement—almost all on the political right, but even some from the left. http://www.foxnews.com/us/2015/12/10/growing-number-law-enforcement-officials-urge-licensed-owners-to-carry-guns/?intcmp=hplnws Preview Open

The following occurred in 1 day:

Continued from Part 1: “You will not sleep on this trip.” Never have words been more true. Going to bed around 3am and waking at 5am takes it’s toll, but adrenaline is Gods way of getting you through it. “We sleep when we die“.

What follows may sound nutty, almost survivalist. Last night on the news a reporter explained that the FBI is keeping an eye on potential Muslim terrorists in every state in the Union. That didn’t surprise me. Our enemies are determined—it sometimes seems much more than we—to inflict as much pain as possible wherever they can. […]

I was watching “Special Report” on Fox News last night and Conor Powell, the FNC reporter in Jerusalem, was discussing the latest wave of attacks on Israeli civilians by Arab citizens or residents of Israel. He said something to the effect that the Israeli government accused Palestinian Authority leaders of inciting these attacks, many accomplished […]

Published on Aug 24, 2015Three friends from the United States traveled in Europe as vacationers. Now the world knows them as heroes. Three Days ago, Anthony Sadler, Spencer Stone and Alek Skarlatos were aboard a high-speed train en route to Paris from Amsterdam on Friday when a gunman opened fire. Along with two others, they […]

I’m getting ready to e-mail the following letter to my local newpaper, the Aiken Standard (or as we call it, the Aiken SubStandard).  Anyone want to bet whether or not it gets printed?  Here it is: The most evil man on this planet today is not Vladimir Putin.  It’s not Kim Jong-un, or even Fidel […]