As every other group seems to be moving away from the outright catastrophe that is the Brandon Administrion, support for his party is conspicuously increasing among one demographic group. 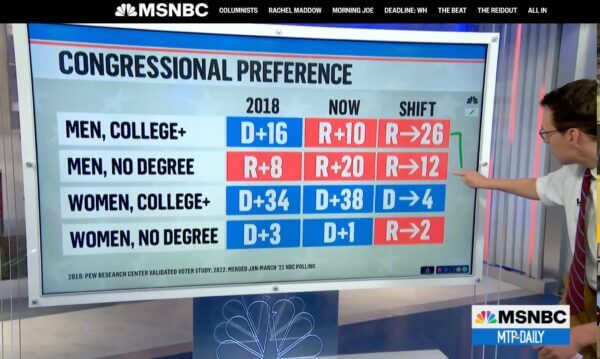 While Democrat cities continue to burn and bleed, and Democrats refuse to denounce their street operatives’ violence, President Trump and Attorney General Barr offer every American a choice, not an echo. On Monday, President Trump went to Yuma, Arizona and stood outside in 120 degree heat, under the desert sun, demonstrating his ability to coherently […]

Observed outside a Circle K recently: two men approached on battered bicycles. One black, one white, they were both desert-lean and weathered. They knew long-term poverty.

Said the black man to the white: “They’re so stupid, they pull down a statue and throw it in the river!” Answered the white man: “Thousands of pounds of bronze!”

This conversation illustrates the Grand Canyon-sized gap between the leftist punks and the poor, those truly without “privilege.” A brief explanation for the perplexed: these were scrap men. They scavenge metal for cash and are acutely aware of the current local market value of every metal. When they see a bronze statue being pulled down by wealthy young whites LARPing* as revolutionaries, these men accurately estimate weight and dollars per pound. There has been much concern over the election about the suburban women vote. Over the course of the last two years, this demographic has waxed and waned in its support for Republicans and Trump. Many cite a growing distaste for Trump’s demeanor as the reason for their displeasure, but this appears to be more of a guess. While its true, women as a whole have increasingly grown disapproving of Trump’s job performance, the NPR/Marist poll that these interpretations are relying on hardly point to Trump’s demeanor for a growing disapproval among suburban women. This is the only poll I have found cited since Rasmussen reported the uptick from the Kavanaugh Affair.