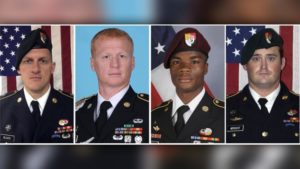 The capture of two Americans who were special forces soldiers is horrible. I can’t imagine what they are going through now. I hope the United States was not involved because it appears to be a total cock-up.  Preview Open

The term “Weapons Free,” is used to describe a missile defense system which has been set to launch whenever and wherever the system’s computer senses any potential threat, according to Special Forces retired Lieutenant Colonel Brendan Welsh who shared a great many illuminating perspectives and theories about the US strike that led to the demise of Iran’s Maj. General Qassem Soleimani with our own Dave Carter.

And while there were no threats to the podcast (except a wisecrack or two by Alphonse Fontenot), Dave couldn’t resist going “weapons free,” in a show which also features a new segment called Meet The Member, in which various Ricochet Members sit down for a fun conversation with Dave. In this first installment of Meet The Member, Dave talks with a fellow veteran, Ken Owsley, known around these parts as “Spin.” They talk about everything from Spin’s time serving in the Army in Germany to sharing some laughs while discussing the value of maintaining a healthy sense of humor. Sportscaster Mark joins in to talk LSU Championship football, and General Hatchett unveils something called the Hatchett Doctrine. While no one was hurt and no small animals were abused in the making of this podcast, we think you’ll enjoy this “Weapons Free” edition of the show.

You heard me – it was kind a weak. The movie 12 Strong came out this week following a big ad campaign and fanfare. Preview Open

We were living in the UK. The Big Man’s orders said that we would be moving to Jakarta, come the summer. I read up on Jakarta, I was totally stoked. On 01 April the Big Man got a call (while he was in the rack. Shift work). Some poor jamoche in some faraway hell-hole had dropped dead from a heart attack. He couldn’t fill (obviously) his follow-on billet. There was a ripple effect across the entire organization. The result was we were no longer going to Jakarta, Indonesia. We were going to Monrovia, Liberia. “Yeah, April Fool’s to you too, [expletive],” said the Big Man. Then he rolled over and went back to sleep. It wasn’t a joke.

Eleven days later, Master Sergeant Samuel K. Doe led one of the bloodiest coups (up to that time) in African history, and took over. Won’t go into the 5Ws of the coup, but it was bloody and the body count was extravagant.

Once again, the Obama administration is kicking our military in the groin. This time it’s a Special Forces Green Beret, SFC Charles Martland. You see Martland confronted an Afghan Commander who had raped a boy and then beat the mother for reporting the rape. When confronted, the commander tried laughing it off. Martland and his team leader […]