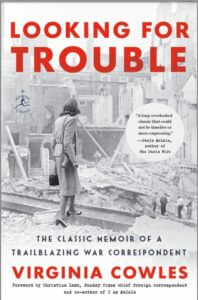 In 1935 socialite Virginia Coles was a society-girl columnist for toney magazines like Harper’s Bazzar, writing about fashion and gossip. She traveled the world writing light pieces about the places visited. Then in Italy she encountered Mussolini and his fascists and her career took a different turn. She became a war correspondent.

“Looking for Trouble: The Classic Memoir of a Trailblazing War Correspondent,” by Virginia Cowles tells that story. It is her memoirs during the period 1936 through 1941, collected from the columns she wrote for various US magazines over that period.

During that period she was everywhere. She covered the Spanish Civil War, her first attempt at being a war correspondent. She was the only correspondent to report from both sides of the conflict, visiting both Republican and Nationalist Spain during the struggle.  It proved addictive. From there she went on to cover events in Europe as the continent slid into World War II.

America is definitely not Europe, but we can find a number of parallels between European history and contemporary America. For example, we’ve previously written about the Italian Years of Lead as a possible template for urban unrest and low-level inter-tribal warfare in the United States. Another example of how things might play out in the […]

I write a weekly book review for the Daily News of Galveston County. (It is not the biggest daily newspaper in Texas, but it is the oldest.) My review normally appears Sunday. When it appears, I post the previous week’s review on Ricochet. Seawriter Book Review A defining event Posted: Saturday, December 17, 2016 10:00 pm Preview […]

It Seems to Me That Nothing Screams ‘White, Eurocentric, Privilege’ Like…
She · 38 Likes

Sadie and Ben: Rest of the Meme
Mark Alexander · 17 Likes

Why You Should Keep Saying Soccer
Ben Sears · 16 Likes