I was thinking of starting a Gulag Group to read and comment on all 7 Parts in three volumes of Alexandr Solzhenitsyn’s The Gulag Archipelago over the next nine months, but the functionality in posts is much better. Solzhenitsyn is a magnificent literary writer, a Christian and ironist whose works are hard to read but […] 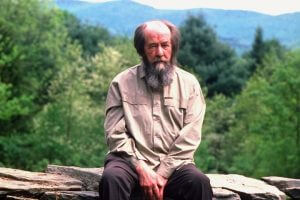 “Over half a century ago, while I was still a child, I recall hearing a number of older people offer the following explanation for the great disasters that had befallen Russia: ‘Men have forgotten God; that’s why all this has happened.’” – Alexander Solzhenitsyn, May, 1983

I cannot help thinking that this is also the lesson to be learned both from COVID-19 and the riots that have visited American cities.

If you number yourself among those who believe in God, then you humble yourself with the knowledge that nothing happens by chance and that world events are the result of heavenly decrees – which may be brought on by human activity or the lack thereof.

“A decline in courage may be the most striking feature, which an outside observer notices in the West in our days. The Western world has lost its civil courage, both as a whole and separately, in each country, each government, each political party, and, of course, in the United Nations. Such a decline in courage is particularly noticeable among the ruling groups and the intellectual elite, causing an impression of loss of courage by the entire society. Of course, there are many courageous individuals, but they have no determining influence on public life.” – Aleksandr Solzhenitsyn

How much of our government today is marked by a lack of courage? We see it most clearly in the response to the COVID-19 epidemic. The states, counties, and cities whose leaders are most frightened are the ones maintaining the lockdown longest. Especially the politicians who fear the electorate and mistrust the common sense of the average person. Arrested three months before the defeat of Hitler’s Germany, his first reaction was like that of the millions he would later write about: “Me? What for?” A decorated captain of an artillery battery that had fought its way deep into East Prussia, Aleksandr Solzhenitsyn was at the time a committed Marxist-Leninist. He even fantasized he was being whisked to a meeting with Stalin. In fact, military censors had read his letter exchanges with a boyhood friend, also in the army, in which they criticized Stalin (“the mustachioed one”) for having deviated from the path laid down by Lenin.

It was more than enough to earn Solzhenitsyn a sentence of eight years imprisonment in the labor camps, to be followed by “perpetual exile.” He served all eight years in various camps, plus three years exiled to distant Kazakhstan, where he worked as a teacher of high school mathematics before his sentence was annulled in 1956 in the wake of Khrushchev’s “de-Stalinization.”

Born 100 years ago today, Solzhenitsyn was educated in the sciences, but his lifelong love was literature and writing. In the camps, where writing was prohibited, Solzhenitsyn used matchsticks and rosary beads as mnemonic devices to preserve 12,000 lines of his verse that he would later publish. What brought him to his country’s and the world’s attention, however, was the publication in 1962 of his One Day in the Life of Ivan Denisovich, a fictional but semi-autobiographical account of a day in the life of a Soviet political prisoner (zek) in Stalin’s time. I’ve been threatening to write a longish post on Alexander Solzhenitsyn (I’ve been reading books by him and about him for a year).  And I still plan to do so.

But I could not help but share a couple of brief thoughts now. Last night, I finished Volume 3 of The Gulag Archipelago. It has been, at the same time, one of the most horrifying and edifying experiences of my life.

Horrifying in its seemingly endless recounting of venality, starvation, slave labor, cruelty, and death. (Estimates are dodgy, but it’s quite clear that between 5 million and 10 million men and women died in the Soviet slave labor camps: the Gulag Archipelago.)