A roundup of stories/posts/videos I found interesting: The Jacquard Loom is historically important,  not only for its direct impact on the textile industry but also for the inspirational role that it played in the emergence of punched cards and computers.  Jacquards are still very much a live industrial technology, although the warp threads are now […]

I write software. I do a lot of my work using Microsoft Visual Studio, what we programmers call an IDE — an Integrated Development Environment. Visual Studio is, in my professional opinion, a pretty fantastic product, the best IDE available for general-purpose programming.

The most recent version of this product contains a “code completion” feature. That is, the program kind of looks over your shoulder while you’re working, makes note of what you’re doing, and occasionally offers to finish whatever it is you’re in the process of typing, based on its assumptions about what you’re trying to do.

Listen here: https://www.angelinvestboston.com/tim-spong-vistapath-bio A terrible error in a lab led Tim Spong to start a company to improve the reliability and efficiency of pathology labs; big industry players are noticing. This interview was part of my due diligence on Tim’s startup, VistaPath Bio. Subsequently, I invested in the company. Preview Open

In some circles I’m known as a pretty bright guy: I can reduce fractions in my head, I know the answers to most science questions found in a high-school textbook (up until the junior year, at any rate), and I can tell you in what centuries the United States fought most of its major wars — and against whom.

The kids I tutor will, albeit grudgingly, admit that I’m no dummy. 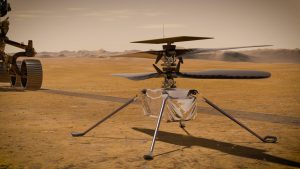 A couple of months ago NASA’s Perseverance rover arrived on Mars. On the exploration vehicle was a small helicopter, the Ingenuity, intended to fly above the surface of the red planet and take photographs and other measurements. Ingenuity performed a rotor spin test this week, and an alert triggered by the craft’s on-board software has prompted NASA to delay the planned launch date for the tiny four-pound flying machine until sometime next week, or perhaps later.

I feel for the people who build these things. I write robotics and automation software, and I’m familiar with the stress accompanying every demonstration of a new automated system. I’m not a flashy programmer nor a particularly fast one, but I do write rock-solid software that does, in almost every instance, precisely what I intended it to do (though whether or not I understood the requirements correctly is another question). Even so, I’ve had my share of embarrassing failures during product demonstrations over four decades of software development, so much so that I never approach a software rollout without at least a little anxiety.

To NASA’s credit, their software quality standards and procedures are astoundingly mature. But Ingenuity is currently 15 light-minutes away from Earth: it will take off, fly about, take its pictures, and (we hope) land successfully all within a minute — and we won’t know what happened until a quarter of an hour later. Or perhaps never, depending on how it goes.

As I’ve mentioned before, I write computer software. I’ve programmed in a variety of domains, from banking to international funds transfer to telecom. Want a blast from the past? A much younger me led the team that implemented the Tandem computer network behind JCPenney’s experimental Telaction shopping system, way back in 1987. (Telaction flopped after […] The Muse was a digital algorithmic music composing machine invented in 1969 by Artificial Intelligence researchers Marvin Minsky and Edward Fredkin at MIT. It was built with the digital logic circuitry of the day; gates, registers, and counters in simple integrated circuits.

While strongly associated with electronic music, The Muse was not a “synthesizer” as it only played a fixed level square wave. Instead, it created original melodies from algorithmic processes, something that hadn’t been seen before. There were no pre-programmed sequences or random sources involved.

Minsky and Fredkin formed a company named Triadex to manufacture the units, which sold for $300. Accessories included an amplifier and a light show in matching enclosures. Multiple Muses could be linked together and synchronized.

Can you bequeath a “license” to digital content — an mp3 music album, a movie, video game, or computer software — when you die? For now, you cannot… legally.  Eurogamer’s Chris Bratt explains why this might be likely to change in the next decade or two. Preview Open

I write software for a living. It’s a good living, because most people just can’t do it. For your amusement, I’m going to describe the revolutionary developments I’ve seen in this field over the last three decades. This means I’ll be skipping the period of time between the discovery of fire and the invention of the Apple […]

So as not to hijack my popular “Computers Then and Now” post, this is an open thread devoted to how to uninstall particular software that might have come with your PC or Mac computer. My bugbear right now is a contact-sync program called “Plaxo” that I believe came with my iMac.  Whenever you start your […]

It’s very early days, but so far the reviews of Windows 10 seem pretty positive. This merely reinforces this meme about Microsoft: Preview Open

Did the Police State Dems Finally Jump The Shark with their ridiculous Mar-a- Lago ra id on Trump?
Unsk · 18 Likes