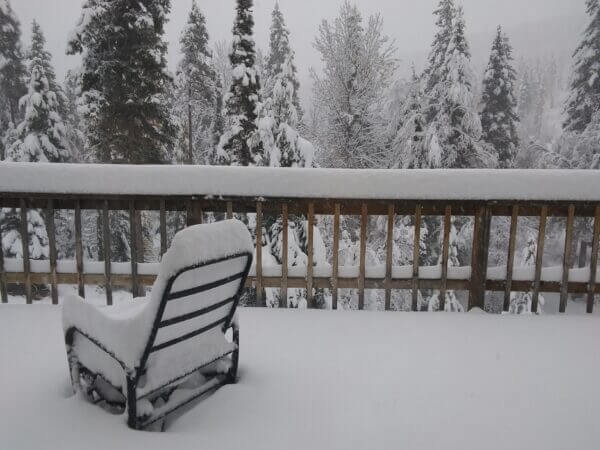 These early November snows aren’t unusual for us. This was Wednesday, November 2.

Well, Snowmageddon II will be here soon. Six to 12 inches fall and strand people for a day, government yawns. Now, three days later, we’re projected to get 2 to 4 inches, and Gov. Ralph “Interstate” Northam has declared a state of emergency.

This storm has snarled traffic and stranded motorists (let’s hope not for 24 to 30 hours, Ralph) in Kentucky and Tennessee, and it’s coming here tonight. Just like last time, it will start with rain and a rapid temperature drop. Makes all the road prep work by the Virginia Department of Transportation ineffective.

A few years ago, I made the choice to intentionally look for joy every day. I’d always leaned more towards optimism, but I noticed that my memories of pure joy were becoming few and far between. So, I made a choice to change that because I knew joy was all around me — it just […]

In the past day, we have had pouring rain, high winds, flooding, and last night, snow.  The back yard was covered in snow late last night, but it had mostly melted by midnight.  This is our front yard, and the neighbor across the street this morning.  Our area is known for its many microclimates. Preview […]

I live in an apartment complex. It has great advantages. Something breaks? Call maintenance. Grass needs cutting? Someone else does it. There are pretty flowers on the grounds spring through autumn, and I never have to lift a finger to dig in the hard ground. (It would probably do me a lot of good to do it, but it’s not going to happen.) It’s nice to have things taken care of. We here in Western Washington don’t get much snow in most winters. So when we have a blizzard, we milk it for all it’s worth. Kids make snowmen out of sparse snow, and we shutterbugs get out and take pictures. The photo above is out our high plant shelf, looking out on the green space […]

Front of the house: Preview Open

It’s January in Florida and after a blustery French-styled mistral blew through Saturday night, along with a tropical monsoon, the temperatures quickly tanked Sunday. Yes, we have it all here. This morning my husband had to scrape a light frost off the truck windshield before heading to work. He used a numbered plastic card that […]

Sunday, Jan. 20, Grover Heights — The parishioners of St. John’s faced mass impoundment of their cars Sunday morning for parking them after the village snowplow had cleared the surrounding streets, but before the snow-clearing parking ban had officially expired. Feisty church lady, Cheryl Knapp, began a heated argument with Marl Burlon, the traffic cop on duty, once she realized his intention was to ticket, then tow, parishioners’ cars for “obstructing a snowplow” that had already been through.

Knapp cited 1 Corinthians 10:23, “‘I have the right to do anything,’ you say — but not everything is beneficial. ‘I have the right to do anything’ — but not everything is constructive,” conceding that the village was within its rights to tow the alleged offending cars. But, she added, “Where is the benefit in ticketing cars for obstructing a plow they are not, in fact, obstructing, since the plow has already cleared the streets where St. John’s parishioners park?” Burlon countered that the village of Grover Heights benefits from ticket revenue, and that it’s not constructive for supposedly law-abiding citizens like churchgoers to be seen flouting even the letter of the law. “When a scoffer is punished, the simple become wise,” he quoted, adding, “Render unto Caesar the things which are Caesar’s — including lawfully-impounded cars.”

I think I see hummingbirds ice skating on our pond. And I need someone to please come get our newspapers from the driveway. Preview Open

Yes, it’s snowing here in Aiken, South Carolina. It’s not much, but it counts.  And yes, school openings were delayed two hours.  No word on closures, but it’s only a matter of time. Snowing in Aiken is several levels above Hell freezing over, but I’d still keep an eye on the news . . . […]

Here in Aiken SC, the forecast for Christmas is mid-fifties with no precipitation—another non-white Christmas. Growing up in Raleigh NC, white Christmases were occasionally promised, but never delivered.      However, I think waaaaaaaay back to 1978, when I had my first white Christmas at age 23. I was an officer in the Navy, stationed […]

I was thinking back to holiday time years ago – when everything was simpler…well, maybe not. Christmas in our neighborhood existed of big red, green, blue and yellow colored lights strung around the porch – everyone had them. My dad, who worked on the B & O Railroad in Maryland, trucked home over the snowy […]

The first snow of November, as the light begins to fail. “One must have a mind of winter / To regard the frost and the boughs / Of the pine-trees crusted with snow; // And have been cold a long time…” If I told the tale of how I became so fond of this poem, […]