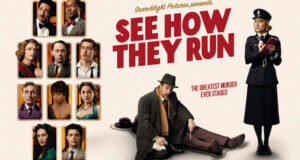 [I’m new here, so just to let you know, my reviews do not repeat the story of the film, and they are spoiler free with occasional warnings.]

It’s not every day you get a real farce on the big screen. Lots of films have elements of farce and are quite enjoyable as a consequence. In the last year, I would say “The Unbearable Weight of Massive Talent” and “Free Guy” are two examples of action films that have farcical moments in them. Most Wes Anderson films also feature the concept of a light, humorous play in which the plot depends upon a skillfully exploited situation rather than upon the development of character. “See How They Run” has the advantage of actually being a film about a play, which is eventually revealed to be a sort of play in itself. That is what makes it a true farce as far as I am concerned.

The story concerns a murder that takes place during a negotiation to turn “The Mousetrap” into a movie. Those of you not familiar with the play simply need to know that it is an Agatha Christie murder mystery. It is also the longest-running play in the history of theater, starting in 1952 and still playing on the West End in London to this day. This movie is not a filmed version of the play, but rather a take off on the plot, using “The Mousetrap” as a sort of touchstone or spine for the mayhem. It mocks the machinations of old Hollywood and the manner in which filmmakers try to take material and rework it to their own vision. The real clause in the contract granting rights to a cinematic version states that such a film cannot be made until six months after the play closes in London. See how this is going to work?