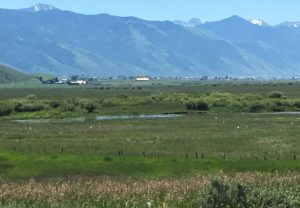 I visited my sister last week in the mountain valley where we grew up. She has always lived there, leaving only for a few years of college. I, on the other hand, have lived in six different places since I graduated from high school. (P.S.–we’re both grandmothers now.) These places were distinctly different from each other. I commented how it was going to be in the 100s the week I returned to my current Mojave Desert abode, and she gasped, “Wow, how can you stand it?”

Well, I “stand it” just like when I was growing up there in Wyoming at 6800 feet in the Rocky Mountains, feeding our farm animals, milking the cows, and going to school when it was -20 degrees at 3:00 P.M. You just figure out how to do it! There isn’t a “normal”–there is just real life. What I want to know is how did our ancestors “stand it”?  When I was a child/teenager, dressing up to go out after school to do my chores, I at least had a house that was illuminated and heated by electricity. I could use a tractor to haul the hay out to the animals in the pastures. We had electric/vacuum-powered milking machines to deal with extracting the “cash crop” from our Guernseys and Jerseys.

My grandparents, who all grew up in the same place, and did the same jobs I did, had NO electricity. They milked their cows by hand before selling it to the same cheese factory my parents used. Grandpa had only horses and mules to till their soil and harvest their hay. Grandma had to gather the wood, build the fire, and then cook the meals.

This week’s WordPress Daily Post Photo Challenge topic is Satisfaction.  Over at RushBabe49.com, my answer is Human Ingenuity.  You will have to drop by to see what I posted.  Post your photos on the theme of Satisfaction in the comments below. Preview Open

Hello Everyone! This is my latest blog post! I am trying to grow as a writer and I would love feedback if you have time. You can leave a comment on the blog or here. Preview Open