There was a prayer rally Thursday at the site of a scheduled Satanic meeting for young children in a K-2 primary school on the southeastern corner of Virginia. A schedule of meetings was arranged under a “tenant” lease used to allow for meetings outside of the familiar teacher-sponsored club arrangements that most people have experienced. No teachers were sponsoring Satan in this instance. 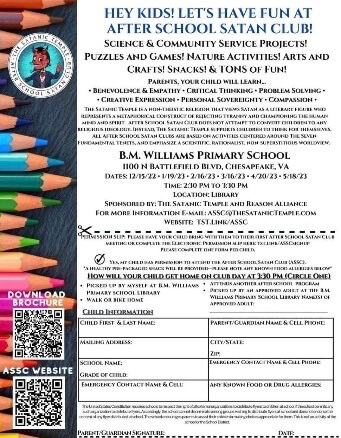 Not a joke, not the Babylon Bee, this is the flyer from a real school in Chesapeake, Virginia, just four minutes from the Walmart where a store manger killed six November 22nd before taking his own life. Shocked parents then received this from the school’s principal (emphasis mine): Satan’s notoriously foul rear end surely have the worst job ever. (I’ve forgotten the Biblical citation for the passage in which these ablutions occur. You’ll have to trust me on this.) Even Satan’s most hard-hearted demons — those who are able to oversee, without breaking into tears, those poor souls who are forced to watch an endless loop of Nancy Pelosi’s speeches — feel compassion for the Rear Enders (their official job classification).

Their job is made worse because Satan is literally the boss from Hell. “You missed three dingleberries!” the Evil One would scream in that irritatingly screechy voice of his. “Use some elbow grease, minions!”

The word “evil” has become trivialized, particularly in this election season. Just like the words racist, homophobic, xenophobic, Islamaphobic, it is casually thrown around like a ragdoll: who gets to play with it next? When one person doesn’t like other people, or dislikes their positions, he or she just calls them evil.

My husband has had a shift in employment lately, with the result that I’m home alone quite often. With the help of an Amazon Prime and HBO Go subscription, I’ve been catching up on all those movies that “everyone” has seen.  This Sunday was a double feature of “The Devil’s Advocate” and “Wall Street.” (Other […]

Ever thought about interpreting the Terminator movies theologically?  Kyle Reese gives his life to save others: the first qualification for a literary Christ figure.  One film bears the name “Salvation,” another “Genesys.”  The chosen child destined to save the human race is born of the chosen woman after a miraculous conception (if time travel is miraculous).  His […] It’s nearly Halloween, which means a cornucopia of horror movies on TV. Most of them are just awful, with a few masterpieces occasionally making the grade. Last night some cable channel featured Friday the 13th, Nightmare on Elm Street, and a couple of zombie features I’d never heard of. Frankly, the horror movie genre is in a slump. It’s zombies, zombies, zombies, all the way down and I’ve never understood their appeal. I have a pretty strong stomach — I always have anchovies on my pizza — but I demur when it comes to people eating people. I just don’t understand how they can be the luckiest people in the world.

For just over 40 years, The Exorcist has been the magnum opus of horror films. I’ve never completely understood how such a frankly religious movie has been transformed into a Halloween staple. Yes, it’s terrifying and — for whatever reason — people love to be terrified. But what makes it a perennial favorite, I think, is the gut deep fear that demonic possession may be possible. Nobody’s going to turn into a zombie or be resurrected as a member of the fraternity of the undead. But at a visceral level, most people believe fallen angels are more than superstition who literally, in the words of the Prayer to St. Michael, “prowl about the world seeking the ruin of souls.”

Satan is out of style, nowadays, which is a very bad thing. Archbishop Fulton Sheen pushed the idea of the devil with a great deal of fervor. Satan’s untimely death in the psyche of present day man is, he said, his greatest triumph. Modern man may be numbed to evil given the terrors of the present age. But when beheadings are all the rage in ISIS land, it might be wise to re-think our dangerous conceit that evil lives only in the hearts of men. Evil is personal. It may be ISIS policy to chop off heads, but individuals carry out the orders. And it could well be that a person — one of unfathomable power — and who is supernaturally skilled in the art of deception, tempts us to break free from the “superstition.”

I wonder what the prayer intention will be? The Harvard Extension Cultural Studies Club is hosting a black mass on May 12 to be staged by The Satanic Temple and which will include a consecrated host. Preview Open