(A Shoddy Tale about Beans and Mamma’s Dear Boy) Jack S. is looking for a room Preview Open

Taking a break from politics, Jack brings back his friend, budding exercise scientist Brady Holmer, to talk about what the “runner’s high” really is, how it doesn’t mean that running is all hunky-dory, and how to deal with running-related setbacks.

I won’t pretend that I have a singularly unique quarantine story, or even one anywhere near the hardest. Life could be much, much worse and I am supremely grateful, above all else, that I got a choice in how this happened. When my university decided to move online, a few days after Yale and Columbia began demanding that their exchange students return and we had the first two confirmed coronavirus cases on our campus, my parents began making plans for me to come home before it became impossible. I said no. There were still exams I had to sit in May, I said, and there was no way I was going to be able to study with everyone home, or take my last three weeks of classes over Zoom with our unstable internet connection. One of my classes had yet to go online, and I didn’t want to leave and miss a tutorial. Flight prices were going to skyrocket. And these were all true enough, especially the excuse about exams, but I stayed mostly to keep my family safe.

This was the first winter and spring in all I could remember that my dad hadn’t caught pneumonia, hadn’t ended up with an inhaler or at the ER, struggling to breathe. So I, who had almost definitely been exposed to the virus on campus, and if not there in our university’s city at large, was going to make a long train trip and go through two airports, one that had been host to thousands of Americans on the continent from heavily infected countries escaping while they still had time, to come home? To potentially kill or do irreparable harm someone I loved? Hell. No.

Morning radio talker Hugh Hewitt also writes an opinion column for the Washington Post, one of only two bonafide conservatives (the other being Marc Thiessen) to do so. I am a great admirer of Hugh, despite being an Ohio “homer” and incessant Cleveland sports fan. His columns are a nice extension of his thoughtful, intelligent, […] 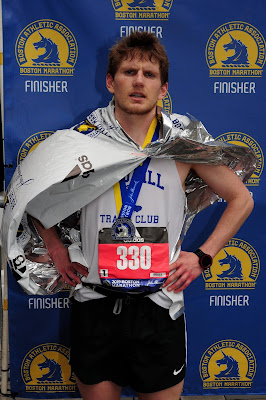 But, again, the Boston Athletic Association, which runs the race, doesn’t make it easy. It’s hard to qualify; hard to get to; and, of course, hard to race. (As I’ve said elsewhere: Marathons are hard.) In the lead-up to and on April 15, 2019, the day of my first Boston Marathon, I experienced all three dimensions of the race’s difficulty.

on the Equality of Animals
Hammer, The (Ryan M) · 14 Likes

Cause of death?
Chuck · 9 Likes