Establishment politicians and those invested in business as usual use “Ross Perot” as a bogeyman, a warning not to stray from whatever candidate they shovel up and tell us we must give money, time, and our vote. Except that it was Perot who was the most electable candidate until the skulduggery or head fake or whatever rattled him around his daughter’s personal life. He had taken the lead in the polls but never recovered after showing weakness or indecision for that week or so.

He was a successful entrepreneur who criticized the self-licking ice cream cone of American CEOs, who (with their think tank and pundit platoons) insisted that American workers absorb the hit of global wage and employment competition while not subjecting their own gilded packages to critical comparison with the then ascendant Japanese executives. “If you want to make a million dollars, become a rock (music) star!” Ross Perot was not engaging in class warfare. Rather, he was using the contradictory narratives of wage competition and executive compensation to point to larger misaligned priorities in U.S. corporate policy, underwritten by U.S. government policy and muscle. Hence his early criticism of NAFTA as it was being negotiated.

He treated the American voters like corporate customers, with charts, facts, and figures rather than campaign puffery. Had he won, he would have been pinned down to perform by his charts, rather than explaining away or evading soaring rhetoric and slogans as Bush had. H. Ross Perot, the man who could have been America’s first Independent President, died today at age 89. When he ran in 1992 against the incumbent George H.W. Bush and the Democratic Party nominee Bill Clinton he received 19% of the popular vote, the highest since Teddy Roosevelt’s Bull Moose bid in 1912.

An Annapolis graduate, he was a pioneer in computer data systems, twice building companies and twice selling them to make his fortune. And he was generous with his money while being appalled at the government’s generosity with the money of taxpayers. A special cause of his was the medical care of veterans. He personally funded the research of Dr. Robert Haley at UT Southwestern that showed that many vets of the first Gulf War did, indeed, suffer from a chemical-induced toxin syndrome.

He will be remembered for his first presidential run which he announced on Larry King’s talk show on CNN. Talking about the nation’s problems in a folksy manner, particularly the deficit and the North American Free Trade Agreement (NAFTA), he promised to run if supporters would self-mobilize and get his name on the ballot in all 50 states, which they did. 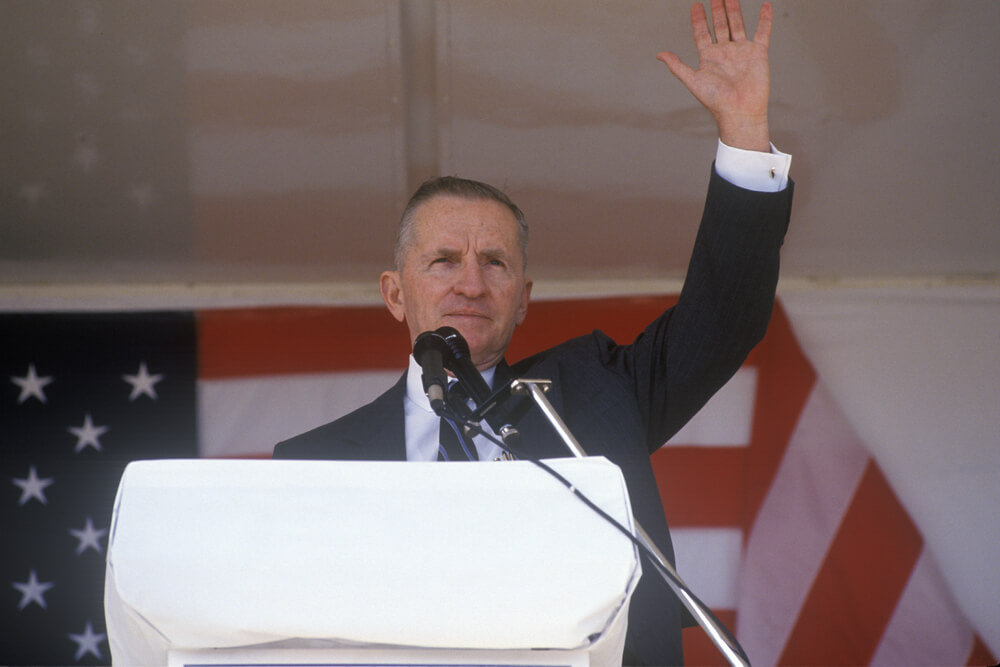 Ross Perot, the billionaire businessman who twice ran for president in the 1990s, has died at the age of 89. The Dallas Morning News reports Perot died following a five-month battle with leukemia. Born in Texas, Perot made his fortune by founding and running two technology companies, Electronic Data Systems and Perot Systems. He ran as an independent presidential candidate in the 1992 election and as a third-party candidate in the 1996 election. Perot’s wealth, fame and confident prescription for the nation’s economic ills propelled his 1992 campaign against President George H.W. Bush and Democratic challenger Bill Clinton. Some Republicans blamed him for Bush’s loss to Clinton as Perot garnered the largest percentage of votes for a third-party candidate since former President Theodore Roosevelt’s 1912 bid. In Fiddler on the Roof, the milkman Tevye imagines what life would be like “If I Were a Rich Man.” Among the shrewder lyrics is the insight that “the most important men in town will come to fawn on me” and pose questions that would “cross a rabbi’s eyes.” Why? Because “When you’re rich, they think you really know.”

One cannot guess how much credibility Donald Trump gains through his reputation for business acumen, but it’s safe to say, quite a lot. He trades, both in entertainment and in politics (if there’s still a distinction) on his reputation as a tycoon, which may be one reason for his refusal (despite pledges) to release his tax returns. Trump’s “brand” is everything. When Tim O’Brien authored a book questioning Trump’s net worth, Trump sued him and after lengthy litigation, lost.

Americans have always revered successful businessmen, but you might suppose that after the Ross Perot experience, they’d have acquired a bit of skepticism about the sort of wealthy men who elect to parachute into presidential races. In an article posted on RealClear Politics, Sean Trende posits five reasons why Donald Trump can win. This is an evolution for Trende, who had previously dismissed Trump’s chances, owing to his high unfavorable rating and his appeal to the shrinking white male demographic. Like many others, however, Trende realized that Hillary’s high negatives and Trump’s potential appeal to at least some nonwhite voters render his candidacy more viable than he’d previously supposed. One of the on-going questions this cycle is why so many self-professed conservatives support Donald Trump. The question offers plenty to think about because “conservative” is supposed to mean something in terms of ideology and policy prescriptions, and that doesn’t seem to match what Trump proposes. But first, the question of what it means to be a “conservative” in 2016 should be satisfied.

Recently, National Review’s David French had a piece that did a great job of explaining Trump’s support. French takes what he sees in his home state of Tennessee and extrapolates that to the rest of the country: