National Review artist Roman Genn came to America from the Soviet Union in 1991. In this episode, he compares the ideology he left behind with that which has gained a strong foothold in this country. His analysis, which comes at a pivotal moment, is worth hearing. And then there are the laughs, which are always plentiful when Roman and Dave have the chance to commiserate. Then, Ricochet Member Boss Mongo (a.k.a. Lt Col Brendan Welsh, US Army Special Forces Retired) drops by to discuss what sorts of national security threats await the new Biden Administration (hint: America’s adversaries are “giggling like little girls.”).

If you’re lucky enough to be in Pasadena this weekend be sure to check out Politicon and stop by to visit Roman Genn of National Review.  He’ll be exhibiting some work, along with others, including LA street artist, Sabo. Preview Open When the Left dominates music, theater and visual art, its naked attempt to strip away culture can only be answered with events like this one at Lotus Contemporary Art Gallery, 511 Roosevelt, Phoenix, April 22-23:   A conservative band of artists will host a show of “provocative” art, most of it blatantly political.  Marc Stolfi’s […]

Behold the everlasting influence of an image! Preview Open

From the hand of Roman Genn: Preview Open

As many of you know, I’ve been Roman Genn’s publicist for several months, and am currently in LA for a couple of months working on projects related to Roman’s art, and the dissident conservative art world at large (please contact me if you want to be involved in something totally cool, but secret). One of […]

At NRO, Rich Lowry and Ramesh Ponnuru make an argument that the Tea Party and establishment Republicans aren’t tearing the party apart; they are hammering out a relationship that promotes candidates who are attractive to average voters.  Instead of trying to identify a single, pure Reaganeque candidate, maybe we should be looking at the movement […]

Yesterday, I read this appreciation for Roman Genn, a contributor here and the brilliant caricaturist for National Review, among other publications.  For those who view art as a powerful tool for freedom, Roman is a gentle hero; jailed multiple times in Moscow as a teenager for his unflattering portraits of Soviet rulers, his tools were pen […]

Oops.  I accidentally disappeared the entire post when I switched out jpegs of Roman’s wonderful painting of Obama playing doctor with the healthcare system. (National Review cover, July 20, 2009).  Our favorite all-American, Russian born artist just celebrated his birthday on May 17.  His delightful bio is HERE, and for anyone interested, he has published […] 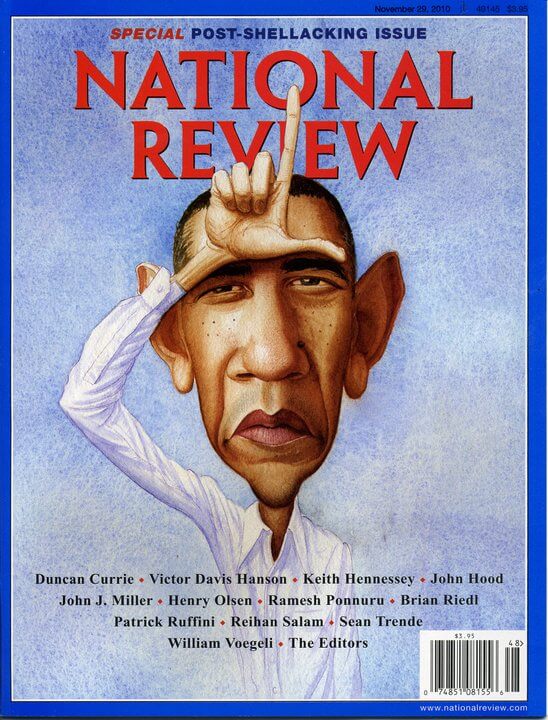 Hartmann von Aue will host a meetup at the Salt Lick in Round Rock, TX on May 3, just prior to some exciting Minor League baseball, and also on May 3, Felicia B and I will co-host in Santa Ana, CA where you can chat with the irrepressible ROMAN GENN, cartoonist and illustrator for National […] Democrats want to believe their own hallucinations
Dr. Bastiat · 19 Likes

Esper: Mother Of All Bombs for Muslims, Not Narcos
Clifford A. Brown · 15 Likes