Some plans have leaked for the reconstruction of the Notre Dame Cathedral (you know, the one that was hit by a devastating fire that in no way symbolized anything). They call for removing confessional boxes, altars, and classical sculptures and replacing them with a light show of scriptures projected on the walls, modern art murals with more sounds and light to create “emotional spaces,” a “discovery trail” of 14 themed chapels with an emphasis on Africa and Asia, and an environmentally-themed chapel. I am not making this up.

Some critics see this as desecration of a sacred space. On the other hand, if the goal is to gut the place of items of religious significance and replace them with trendy performance art, a lecture on diversity, and an altar to Gaia, I think they’ve absolutely nailed the Roman Catholic Church in the 21st Century.

In another first for this podcast, Jack gets a priest onto the show, Fr. Brendan Glasgow of St. Peter’s on Capitol Hill. Fr. Brendan is 27, only slightly older than Jack himself. So Jack asks this eminently trustable (since younger than 30) fellow what it’s like to be a Millennial priest, why he became one so young, and…whether he watched SpongeBob when he was growing up. The important questions, in other words. 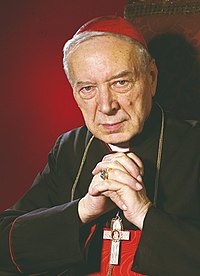 Cardinal Stephan Wyszyński, often called the “Primate of the Millennium” led the Polish Catholic Church for more than thirty years, and along with it, survived some of its most challenging times.

He was born in Zuzela, a tiny village bordering on the Bug River (a funny name, but a waterway with immense significance as a dividing line, in the cultural, religious, political, and military senses) on August 3, 1901. Like much of Poland, the area was ping-ponged around from Russia to whatever version of Poland was in effect at the time, and as a result of the instability, even families like Wyszyński’s which could claim some minor upper-class or noble status, were penurious and lived hard lives. His mother died when he was nine, and he spent the next decade or so in school and then seminary, and was ordained on August 3, 1924, his twenty-third birthday.

He continued his studies and earned a reputation among his fellows as a dedicated and thoughtful priest. So dedicated and thoughtful that he had to leave his living in Włocławek when the Second World War broke out, as he’d come to the attention of the Nazis, who viewed him as a likely candidate for leader of a resistance movement, and as someone who had rather more influence than they liked with the local population.

The 90’s came and went. The priestly abuse scandal came, went and returned. Little was done to fix the problem. As has been discussed here, those who tried to act meaningfully were marginalized. Now, of all people, it looks like Francis is taking action. https://nypost.com/2018/12/03/pope-francis-says-gay-men-shouldnt-join-catholic-clergy/   Preview Open

There is no indication that this is a fake news site. Vatican Bishop is openly praising a Government that forces women to have abortions and jails people for practicing Christianity, because they have a Government-controlled economy and share the Pope’s position on Global Warming Bishop Marcelo Sánchez Sorondo, chancellor of the Pontifical Academy of Social […]

The last two Sundays, I have attended mass here in Birmingham. The first Sunday, I went to check out the Lebanese church, since I knew some of my relatives would give me a hard time if I didn’t. The church was beautiful! While it’s not my first time going to a Maronite mass, the combination of […]