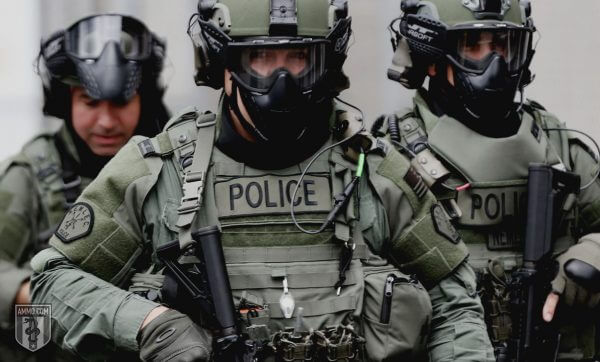 The claim often heard from those attempting to pass more gun control legislation is that all they’re trying to do is get the “weapons of war off our streets,” but it’s simply untrue that “weapons of war” are available to the general public. You’d last about three minutes in a conventional war with an AR-15, even with one of the most aggressive builds you can get your hands on (that doesn’t mean it’s impossible for guerilla uprisings to defeat powerful enemies). The truth is that the only people with “weapons of war” on America’s streets are, increasingly, the police.

Thanks primarily to the Pentagon’s 1033 program which allows law enforcement agencies to get their hands on Department of Defense technology and the Bush-era War on Terror, American police have received a startling amount of heavy-duty, military-grade hardware. Between 1998 and 2014, the dollar value of military hardware sent to police departments skyrocketed from $9.4 million to $796.8 million.

Given the downstream destruction and deaths that resulted from the antics of fools and reprobates following the George Floyd incident video coming to light, even a well intended person that seeks justice who captures such an incident on film again may pause and think very hard before turning over such a video for consideration by […]

Fox News’ Brian Kilmeade joins host Ben Domenech to discuss the state of media coverage during coronavirus and recent nationwide riots. Kilmeade argued there is a difference between those who are protesting and those who are rioting and looting. The media, however, has portrayed them both as justified in their pursuit of racial justice. Violent protests in Charlotte, NC, turned deadly in their second night, when a civilian was shot by another civilian. That wasn’t all. Rioters were seen trying to throw a news photographer into a fire. A CNN reporter was attacked on the air. (Basically somebody came up and body checked him to the ground.)

So what’s all this about? Tuesday afternoon, there was a police shooting in Charlotte. Around 4 pm, police were at an apartment complex in the University City section, in the northeast part of the city, near UNC Charlotte, serving an outstanding warrant. There are a few galvanizing “truths” within the dogma of the left in America which when exposed to sunlight, blow up bike B movie vampires.  First and foremost among those truths is the absolution of any person of marginal black African decent in America from the responsibility for their own misery.  If they commit crimes, […]