A couple of weeks ago, my wife and I paid a visit to our daughter in Massachusetts.  In the parking lot of her apartment, I discovered this delightful tableau: 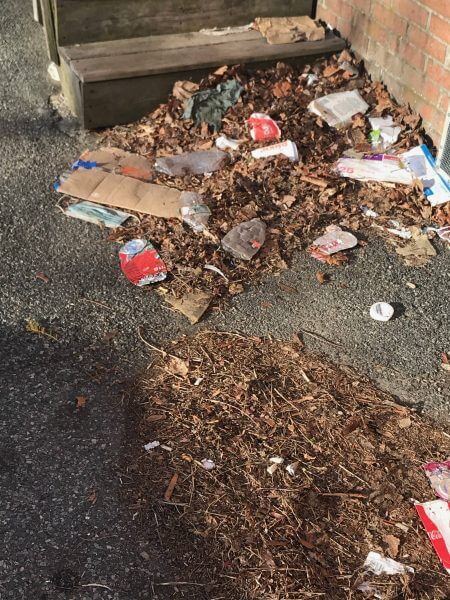 Today is the 51st anniversary of Earth Day, a major national event prompted by the late Gaylord Nelson, a Democratic US Senator from Wisconsin. Some say it is inspired by this oil spill off the coast of Santa Barbara, California. About 22 million people – at the time, about 10 percent of the total US population – […]

Several times a month when I’m driving south on Interstate 35 to go to work, I see something like this plodding along in the other direction: Every so often, I get a mailer from the American Association of Retired Progressives shilling membership in their organization.  I would think that after a decade or so of no response, they’d get the idea that I don’t want to join their damn club.  But they keep sending me this garbage and I throw it out with all the other junk mail.

I got another one yesterday and noticed that “Please Recycle” was printed on the back of the envelope.  As per my usual practice, I opened it and tore the contents to shreds before trashing them.  On every piece of paper was the same request:  “Please Recycle.”

When I was a Boy Scout, I always collected the most newspapers in the annual fundraising drive. My mom helped establish the first recycling center in my hometown. I spent many of my weekends in high school sorting used paper, glass and metal. When driving, she would pull over and have one of us pick up any aluminum cans or returnable bottles she saw lying beside the road. I always carried a sack with me to carry any recyclable material I found.

Most people love the idea of recycling as they believe they are saving resources and helping mother Earth. In this video I attempt to show why this idea is not only wrong, but dangerously so. Preview Open I read the Times for the same reason I stare down from the top of tall buildings: Terrified fascination at what might come next. Here is a case in point:

But two years in, Citi Bike’s inroads have been decidedly uneven, with men far outnumbering women in using the bike-sharing system. A little time on Eighth Avenue on a recent morning, watching the stream of Citi Bike riders heading north past Pennsylvania Station and toward Times Square, was instructive. Man after man pedaled by, some in suits, others in jeans. From time to time, a woman on a Citi Bike rode by.

For the bike service, that is a problem.

Office Christmas parties have few redeeming qualities. I maintain that the world would be a better place if the practice were done away with completely. I do, however, have a rule about never turning down free food.  While standing amongst co-workers this past Christmas, plotting how I could subtly steal the entire tray of cannolis, some of our colleagues from Britain inquired as to where the recycling was.

One co-worker pointed to the holiest of holies, while beaming with unjustifiable pride.  Mildly surprised to find that we Yankees observed the same religious rites, our British colleagues began inquiring as to the depth of our devotion. Anyone can recycle bottles, cans and stacks of printer paper, but did we recycle cardboard? The American congregation was unsure.

Our betters in the California state legislature have passed a ban on plastic grocery sacks. Signed into law by Governor Brown redux, the law begins to take effect next July.In a state where budget realities force Democrats to choose between boondoggles, this should come as no surprise. As a Californian and grocery shopper, the ban will […] I hear often that ours is a throwaway culture. If we’re done with an item, we toss it in the garbage. Although our household produces several full garbage bags each week for the dump, I can think of a number of ways our communities “re-use, re-purpose, and re-cycle” useful items that pre-date that popular phrase by decades.

Film Review: Crimes of the Future
The Girlie Show · 15 Likes