The 117th Congress is winding up its work with a heavy-duty “lame duck” session, replete with unfinished business – items before the election that were kicked down the road. While oddly focused on legislation that wasn’t needed – the misbranded “Respect for Marriage Act” – it faces deadlines on more pressing matters. That includes funding […]

What happens when a PhD in English, a woman, takes a job with the railroad?..specifically, a blue-collar craft job…in 1979?  Linda Niemann tells her own story. I was reminded of this book, originally published in 1990, by the recent railway labor troubles and the threatened national strike.

On the Rails is a remarkable document–a book that “is about railroading the way ‘Moby Dick’ is about whaling”, according to a Chicago Sun-Times reviewer. (Although I think a better Melville comparison would be with “White Jacket”, Melville’s book about his experiences as a crewman on an American sailing warship. Which is still very high praise.) 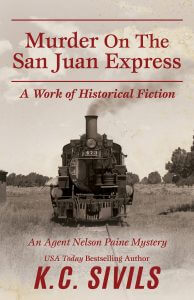 Johann Mueller is a physicist. He fled Germany for the United States to escape Nazism.  The US is at war with Nazi Germany, with Mueller employed by the US government as a scientist. It is why he is on Denver & Rio Grande Western’s San Juan Express, heading towards a Colorado mining town.

In “Murder on the San Juan Express,” a historical mystery by K. C. Sivils, Mueller never makes it to his destination. His body is found along the track after he fell from the train. Was his fall an accident or was he pushed?

Since Mueller is a federal employee, the FBI investigates. Special Agent Nelson Paine is assigned the case. Paine’s boss, intends to steal the credit if Paine solves the crime, and shift the blame to Paine if Paine does not solve it. Paine knows this, but does not care. He wants to solve the mystery. On 10 May 1869, 150 years ago yesterday, the newly reunited United States were tied together, from coast to coast with the first transcontinental railroad. Without any modern construction or surveying tools, the two teams, building towards each other from east and west, met in Promontory, Utah. The Union Pacific and Central Pacific Railroad presidents met and drove a ceremonial final spike. With this, transportation accelerated far beyond any prior technology.

The inherent efficiency of even wood or coal steam engines over animal and sail power meant those modes would change. Horse or oxen would now service hubs defined by rail stops. The stops, necessary to refueling with coal and water, became towns. The glorious era of clipper ships was cut short, the golden spike puncturing their whole business model as surely as the rocky coast of Cape Horn could hull them. @seawriter can tell that tale far better.

The original wire story from AP has been reprinted in honor of the 150th anniversary of linking the United States by rail.

GLDIII posted Orville Wright’s 1905 description of the sensations of flying. This reminded me of Fanny Kemble’s description of her first train ride, in 1830. First, here’s Orville:

When you know, after the first few minutes, that the whole mechanism is working perfectly, the sensation is so keenly delightful as to be almost beyond description. Nobody who has not experienced it for himself can realize it. It is a realization of a dream so many persons have had of floating in the air. More than anything else the sensation is one of perfect peace, mingled with the excitement that strains every nerve to the utmost, if you can conceive of such a combination.

How To Write A Great Political Post
John H. · 5 Likes