The Historic Charleston (SC) Foundation, whose store’s proceeds go to historic preservation in the city. / Shutterstock.com

I am a preservationist. I am also, I’d like to think, a classical liberal. By any conventional logic, this makes me a walking, talking contradiction.

Many years ago, I wrote my senior thesis on the origins of capitalism. I argued that capitalism can be defined as the ability to leverage one’s own assets, coupled with a legal system of equality under the law. This sounds easier than it is. In most of the world, throughout most of history, property has ultimately belonged to a lord, a king, or — most critically — to the future generations. If one is farming a piece of familial land, then the property is not actually owned by the farmer. He is, instead, a steward, connecting the past to the future. He cannot mortgage the property, because he cannot lose it. Capitalism requires the ability to lose one’s investment, and a society where the real estate is held as familial land cannot free up the capital required to achieve the enormous growth in wealth that capitalism enables.

Equality under the law is quite difficult as well. Almost every legal system has different rules for different people, and some kind of immunity for rulers. This kind of law, however, ultimately comes at a steep price for the populace. Only a fool invests in a new venture that the king can seize on a whim, so the most successful nations are the ones that put the law above any man. In order for capitalism to work, the system has to allow, at least theoretically, a poor man to sue the king for a property violation – and win.

Senator Sanders did his doddering fool act last month or thereabouts & said, it’s unacceptable that some nobody country worth nothing in comparison to the accounting errors in the federal budget has faster internet than America. I know a bit about that country, because that country is Romania. Yeah, the internet speed is sweet unto […]

This article by Hernando de Soto makes a very worthwhile point: many of the undocumented immigrants to the US and other western countries are undocumented in their countries of origin as well: Far larger and far more damaging is the difficulty that afflicts the 5bn people [globally] who lack documented property rights. In Mexico alone, […] Nearly a decade ago, the United States Supreme Court delivered one of the most controversial decisions in its history, Kelo v. City of New London, upholding a decision by state officials to seize private homes through eminent domain to make way for a massive redevelopment project to benefit powerful private developers. The ruling triggered outrage across the political spectrum. In response, Americans sought to safeguard their property rights through reforms at the state level. While some of these endeavors were successful, most were hampered by loopholes or ineffective tinkering with procedural details, thus leaving property rights as vulnerable as ever.

Arizona was different. In 2006, that state’s voters overwhelmingly approved the Private Property Rights Protection Act, one of the strongest protections for property rights in the nation. The Act is an excellent model for states that want to provide meaningful security for one of the most essential human rights: the right to ownership. Private property is one of humanity’s great discoveries, like fire, or DNA, or the scientific method. Like fire, property has the ability to release a kind of unseen power from nature, to transform a desert waste into a luxurious resort like Las Vegas, for instance. Like DNA, property represents something deeply ingrained in human nature; no society has ever been found that did not have some concept of property. The universality of property suggests immediately that the concept is not just an arbitrary social creation. Instead, property is something common to all human beings as human beings—it doesn’t have to be taught to people, because it is natural.

Humans naturally develop a concept of “mine” in parallel with their development of self. Children discover the word “mine” very early on, and they seek to exclude others, even their own parents, from things they identify as theirs. Such early development suggests that the concept of “mine” is not initially taught to children, or absorbed by them from the surrounding culture, but expresses a natural human tendency. A child’s “awareness of his own property rights,” wrote Dr. Benjamin Spock, comes naturally “because it fits with his growing sense of self and assertion of self. Early in his second year he becomes conscious of the fact that his body is his.” Indeed, what children need to be taught is how to share, not how to believe in private property rights!

Volokh (Ilya Somin i.e.) covers (better than me, anyways) Horne involves a challenge to the forcible appropriation of large quantities of raisins by the federal government. The forced transfer is part of a 1937 program that requires raisin producers, in some years, to turn over a large portion of their raisin crop to the government so […]

After stoking the fire yesterday, I hoped I’d get a chance to offer my own olive branch as we again look for common ground. Well, here it is.  I learned today that a local group of religious priests (that is, priests who belong to an order — like Franciscans, Dominicans, Carmelites, etc) had been forced out […] The fundamental problem with every immigration reform proposal is that most of us don’t trust politicians, Republicans or Democrats, to enforce the border. In principle, this is one of a government’s primary duties. But, assuming the Feds want no part of it, perhaps there is a private alternative.

Might it be feasible for a private security firm, funded by donors interested in border enforcement, to set up along the Mexican border with the permission of individual land owners?

A 24/7 presence of armed men not restrained by bureaucratic policies and politics could be an intimidating presence that would deter trespassers. Legally, it would be no different than any business protecting its own property with security guards. 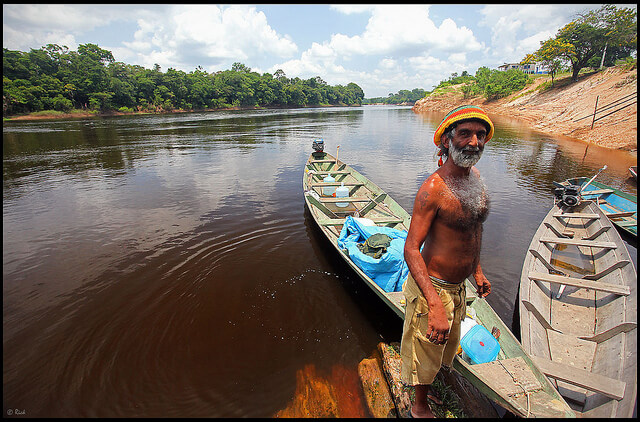 If you can wade past the Rosseauian assumptions regarding the natural affinity indigenous Amerindians have for the unspoiled land of their ancestors — and I recommend you bring high boots — you’ll find something quite interesting in this New Scientist piece: local control and property rights are better stewards of tropical rain forests than are do-gooder environmentalists and the governments they recruit to do good:

A report from the World Resources Institute and the Rights and Resources Initiative, both in Washington DC, reviews over 130 earlier studies in 14 countries. Securing Rights, Combating Climate Change concludes that most communities are better forest custodians than governments.