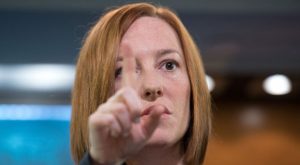 The opening moments of White House Press Secretary Kayleigh McEnany’s second press conference called to mind a dominant mixed martial arts fighter taking down her opponent in the very first exchange of a championship bout. Since the UFC rules provide for championship fights of 5 five minute rounds, it was fitting that McEnany closed out the briefing in just under 25 minutes. I thought of women’s featherweight and bantamweight champion Amanda “Lioness” Nunes, but then thought that, in terms of style, Valentina “Bullet” Shevchenko was a better analogy.

What on earth am I talking about? Mixed martial arts have become just that, taking successful techniques from all unarmed “pure” combat sports. You may recall that an Olympic judoka, Ronda Rousey, established women’s place in the UFC. You may not know that she was ultimately driven out of the sport by effective strikers, ultimately dispatched to big time wrastlin’ by Amanda Nunes’ devastating combination of punches and Brazilian jujitsu takedown and grappling defense.

Rousey, you see, never learned a few basic wrestling moves, called “takedowns.” That is, she was always looking for a standup flip or throw rather than “changing levels,” dropping under her opponent’s fists to drive her shoulders through the thighs or hips. This is called “shooting,” as the fighter are dropping and driving forward or at an angle with the full power of your rear leg. From that move, she can get into all sorts of striking or grappling attacks. Here is what that basic move looks like on a training mat: