Headline: R.N.C. Signals a Pullout From Presidential Debates. Is the RNC really about to do something that isn’t stupid? All I know is my gut says, “Maybe.”

The Republican National Committee is preparing to change its rules to require presidential candidates seeking the party’s nomination to sign a pledge to not participate in any debates sponsored by the Commission on Presidential Debates.

It’s just been announced that, considering President Trump was diagnosed with COVID, the next debate will be virtual. President Trump has declined, and instead, announced that he will hold a rally. I’m bothered by both of his decisions. First, I was very upset when hearing he and Melania had contracted the disease, and that he […] 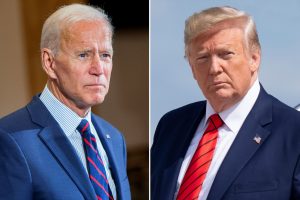 I’m going to ignore policies in this post. By now, I think we know where each candidate stands on particular issues. I want to focus on their character. The media constantly tells me how Trump is an awful, malignant human being, and that alone should disqualify him for office. I’m then told that Biden is the polar opposite of Trump, and would return prestige and decency to the Oval Office. I don’t agree with this at all. Here’s why:

Work ethic: Donald Trump was born with a silver spoon in his mouth. Point against him, but that’s out of his control. He could have lived off of his inheritance for the rest of his life, but he chose to work in a highly competitive industry. I think that says something about character. Joe Biden has been in politics for his entire life. He dabbled in law briefly but otherwise doesn’t have any private sector experience. Thirty years old and he’s going to tell the rest of the world what to do.

Inappropriateness: There are several videos and images of Biden acting strange around women, sometimes underage women. He has been quite liberal with his hands and you can see how uncomfortable these women (and girls) are in the various Biden memes that are out there. Trump almost had his 2016 campaign tanked when the tape came out of him stating that women liked when he “grabbed them by the p***y.” He was making a crude statement, in private, about hypergamy. That’s not the same thing as rape. I do not think Biden is a rapist. But I’ve heard excuses for the way he gropes women such as “that’s just the way men of his generation act.” I ‘ve never seen Trump do anything like that and Trump is almost the same age as Biden.

If you are not watching over the air waves, by satellite, or cable, you still have good options. If you want your debate straight, no spin or filler, go with C-SPAN. You can watch the debate live via embedded video on C-SPAN.org. C-SPAN also has a YouTube channel, so if you have YouTube access, your […]

I posted a draft of this on Ricochet three years ago. This version appeared in American Thinker. I’m posting it again because it’s still pertinent.

There has been widespread dissatisfaction with previous presidential debates between the Republican and Democratic candidates.  In 2012, Candy Crowley stated shortly before the second debate that she would not abide by the contract she signed.  She then interfered in the debate on the side of Obama.  In 2008, the vice presidential debate moderator, Gwen Ifill, was completing a biography of Obama.  One can easily surmise that financial considerations alone gave her a bias favoring Joe Biden.  Clearly, her book had the potential to sell more copies if Obama won the presidency.  One may ask why the Republicans didn’t insist that these biased moderators be removed.  This tacit agreement to participate in a process that was biased against them may partially explain why they lost both races.

The last couple of weeks have been a strange but eventful stretch for the 2016 presidential campaign, and we seem to have reached yet another new low for the GOP.  Recent developments, even some that many may have seen as at least somewhat positive, have only made me sadder about the state of conservatism and […]

The first presidential debate between Hillary Clinton and Donald Trump last Monday night was highly anticipated and watched by a very large number of viewers.  Many commentators have already weighed in with their opinions about how things went for the participants and what impact the event might have, but I’d like to add a few thoughts […] Americans are pretty interested in these Republican presidential debates. Last night’s at the Reagan Library appears to be the highest-rated event in CNN’s history. So whatever else the debates are for the GOP, they are an opportunity to present to millions of voters a modern vision about growth, opportunity and shared prosperity in a changing US economy. And talk about a news hook. The Census Bureau yesterday released new figures — whatever their flaws— showing continued middle-class income stagnation.

Yet the “middle” class was mentioned just four times vs. 10 times for the “Middle East.”

“Parent” — as in “single parents,” for instance — was mentioned just three times vs. 23 times for Planned Parenthood.

In early 1990, as I was preparing to leave the Air Force, I was associated with a social group that included a woman who was a mucky-muck in the Maryland chapter of the League of Women Voters. Those of my vintage may remember that public opinion of the League around that time was pretty positive:  […]