Jim Geraghty of National Review and Greg Corombos of Radio America serve up three crazy martinis today.  They shake their heads at the the rampant speculation that’s constantly swirling around the Trump administration staff – from the same people who had no idea Trump was going to fire James Comey.  They also react to the Tennessee woman who forced her Republican congressman off the road, started beating on his windows and blocked his path – all to very little reaction from the media.  And they discuss the left’s emerging acceptance of polygamy and open marriages while also updating the rise of sologamy, otherwise known as marrying yourself. Like prosecutors, activists should employ discretion, giving some thought to the best allocation of their talents, efforts, and scarce resources. If you’re a national, libertarian think tank operating in 2015 America, you’ve no shortage of  causes worthy of your attention.

That’s why I’m a little confounded — not a lot, a little — that the Cato Institute filed an amicus brief in federal court on behalf of the polygamous family featured on TLC’s Sister Wives. The show documents the life of a polygamist family, including patriarch Kody Brown, his four wives, and their 17 children.

Before 2013, a person was guilty of bigamy in Utah when, After a few days of letting my pro-SSM friends and family revel in their victory, I took it upon myself to start pushing back on Facebook against the persecution of the Kleins and other conscientious objectors. What I learned says a lot about the developing cultural battlefield.

Progressives honestly don’t realize how deeply hypocritical it is to argue forcefully for “one special spouse” in precisely the same rhetorical manner that opponents of gay marriage have been throughout this national psychodrama. In practically the same breath, they note that laws banning homosexuality existed until fairly recently, then dismiss the possibility of plural marriages because they’re not legal anywhere. Sound familiar?

I like to point out that it’s a simple exercise to extrapolate Justice Kennedy’s logic to plural marriage and be equally valid. If love, dignity, and identity are the litmus test of what constitutes a marriage, the number of participants is trivial. The argument will go like this: …for about five seconds. But you know, that’s something.

Over at Slate, Saletan kindly explains to us why Justice Alito and Charles Krauthammer (in an old column still making the rounds) are wrong to suppose that the arguments made in favor of same-sex marriage might also be used to justify polygamous marriage. What it boils down to is that there are basic, natural facts about human beings that make monogamy stable and salutary in a way that polygamy just isn’t. Basically, the problem is jealousy. When we give our lives to another person, we want that person to be equally devoted to us. If we invite threes and fours to the altar (or county clerk’s office, or whatever), that’s just not going to work out as happily for anyone.

Let me pause for a moment to bang my head against the wall a few times. Letting the ear-ringing die down now. OK, I’m back.

I posted this as a response in Parent A’s Libertarians thread but have decided to give it a thread of its own. I have mostly stayed out of the SSM discussions on Ricochet, but I feel this deserves consideration. It is written by an Orthodox Jew who is an award winning screenwriter, Robert J. Avrech. […]

In many debates about same-sex marriage, traditionalists argue that marriage cannot be rationally defended as a relationship between two people once it is opened to same-sex couples. Those who favor state recognition of SSM — among whose number I count myself — generally blow off this objection, but provide little reason for their dismissal, let alone attempt a refutation.

I’d like to correct that omission and offer an argument for why civil marriage can and should remain restricted to couples, regardless of whether one favors or opposes SSM. I believe traditionalists are right to worry about legally-recognized polygamy and share their opposition to it. However, I believe that position can be more easily defended than is generally assumed. In short, I think this is an important battle that we can win.

(The Hague), the first case of polygamy was officially recognized in Europe last Friday. Victor de Brujin (46) married civilly Bianca (31) and Mirjan (35) with a wedding ceremony that took place in front of the notary, who registered the tripartite relationship, the Brussels Journal reported. The terms “marriage”, “marry”, “civil marriage”, “betrothal” are (still) […] 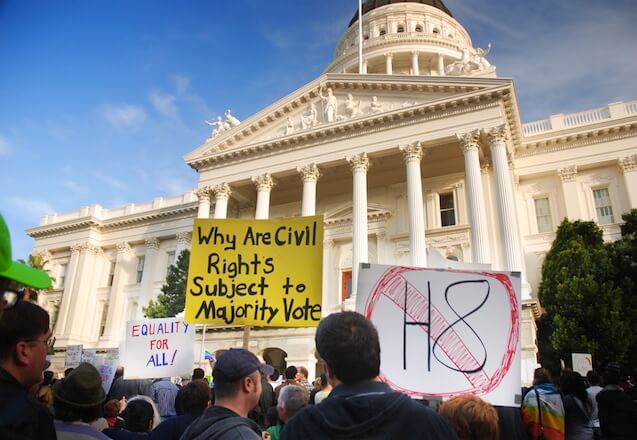