From a WSJ op-ed: “As Tennessee expands possibilities for new charter schools, critics are assailing classical education. Some of these schools teach students about the sages and scoundrels of ancient Greece and Rome.” In The New Republic, a public school teacher from New York seems concerned that classics-focused schools promote “retreat from the public sphere” along with sundry bad things such as “nationalistic exaltation of Western civilization.” 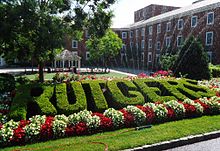 When I heard that the chancellor of Rutgers University had retracted his statement condemning anti-Semitism, I was spitting mad. And I’m trying to get my head around the spineless, hateful, and bigoted statements that university executives all over the country are prepared to make in order to pacify the angry crowds.

In case you missed this story, chancellor Christopher Molloy initially sent out the following email:

Recent incidents of hate directed toward Jewish members of our community again remind us of what history has to teach us. Tragically, in the last century alone, acts of prejudice and hatred left unaddressed have served as the foundation for many atrocities against targeted groups around the world . . .

This is a post that I published in 2014, but is now, sadly, more relevant than ever. Even the reference to Michelle Obama fits with current events…

Many will remember Michelle Obama’s 2008 speech, in which she said:

Every day, people are losing their jobs because of political opinions or assertions about reality which are considered unacceptable. David Shor, a political data analyst, lost his job after tweeting a summary of research indicating that nonviolent protest tactics tend to be more effective than violent tactics. At the Poetry Foundation, both the president and the chairman resigned after being heavily attacked because their statement on the current situation…which said that the members “stand in solidarity with the Black community, and denounce injustice and systemic racism”…was vague and lacked any commitment to concrete action. An Illinois high school principal finds her job under attack after advising students that, if they protest, they should refrain from violence and looting. The list could be expanded indefinitely and includes people in all industries and at all levels.

This isn’t new. For the last two decades, the ‘progressive’ left has loudly insisted that dissenting voices (dissenting from the Prog worldview, that is) must be suppressed. But the trend has accelerated sharply.