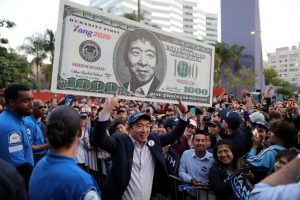 Before you try to Google “American Muslim Party,” don’t bother. These Islamists are not bold enough–yet– to tell everyone how they are vying for the halls of power. M. Zuhdi Jasser of the American Islamic Forum for Democracy has once again alerted the American public that political Islam is alive and well. Under the guise […]

An interesting phenomenon may have arisen out of the unusual relationship President Trump has with the Republican Party.  Fundamentally and Constitutionally, there is nothing in the framework of the US federal government that relies upon political parties.  The tensions built into the US government were established to exist between the Executive, the Legislative and the […]

How would you have voted in your state’s primary election if you knew the final choice would be between Cruz and Trump?  The GOP shot itself in the foot yet again. Through its foolish and unjust system of staggered primaries, it not only refuses voters in later states the opportunity to vote for a full […]

If this was how Republicans argued in televised interviews, they wouldn’t always be stuck defending themselves against Democrats’ lies. Instead of investing in fleeting individual campaigns, the Republican party should invest in promotion of videos and arguments such as this.   Preview Open