The desert wind is blowing lightly through the palm tree fronds this Sunday, Palm Sunday by the western churches calendar. The weather carried on the wind is sunny and increasingly warm. Two thousand years ago, on the first Palm Sunday, the fickle crowd swayed in favor of a promised prince of peace, a ruler to set things right. Within the week, the wind shifted again, bringing darkness to match men’s hearts and death to set things right.

Years ago, I caught a moment with a rainbow set in a dark sky over the palm trees planted in an Arizona desert city. I thought of it the evening before Palm Sunday and dug it out of the archives. The rainbow calls to mind Noah and the Great Flood, when the Sovereign of the universe was so offended that he used water to wash away almost all of life on Earth. Yet, He chose one righteous man and his extended family, along with a population of birds and beasts, to weather the cataclysm. No sooner had the flood waters receded and the ark emptied, with Noah leading sacrificial thanks, then the Lord said: 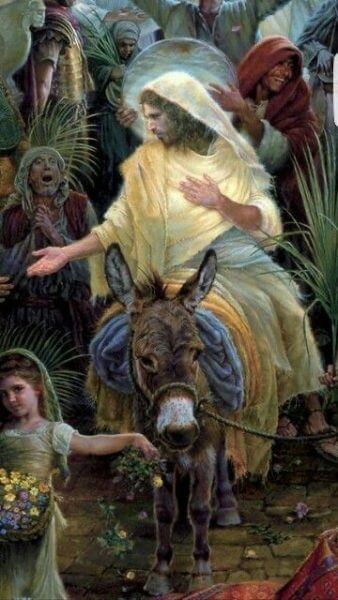 It was Sunday and He rode an unbroken colt in procession through the gates of Jerusalem, heir to the Davidic line and the doer of signs and wonders prophesied to mark the Anointed One, the Messiah, of the Lord who would free the children of Israel. Sweet hosannas were sung by the crowds and palm branches were gathered and waved in celebration as Jesus passed. In this brief moment, it appeared that Heaven and Earth were reconciled and the enemies of Israel would be routed, heralding a golden age like none before it. David had also ridden a donkey, signifying to his people that he came to work, not on a horse that would signify a conqueror.

Of course, the optics were deceptive. I won’t share any spoilers, but that mundane golden age thing did not shape up to the expectations of Judah. For today, Jesus is the triumphant Messiah come to free His people and they celebrate. For a flickering moment. 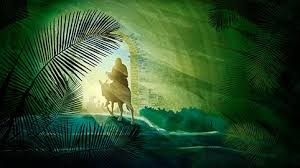 Today is a holy day among Christians, at least it used to be. Palm Sunday was always featured in headlines and honored.  The only headline I saw this morning was a bombing in Indonesia during a Palm Sunday Mass, with fatalities. Does the world still stop on this day, and think about its significance?

In Matthew’s recounting of the entrance into Jerusalem, Matthew specifically draws attention to a number of Old Testament prophecies being fulfilled in Jesus.

In the first verse of Matthew’s recounting of the entrance into Jerusalem, we hear that Jesus and the disciples were in Bethpage. Bethpage is one of the last villages on the road from Jericho to Jerusalem, and is located on the Mount of Olives.

To help you breeze into the weekend, sit back in your favorite chair or cruise down your favorite road with one of Chet Atkin’s classic instrumental recordings, “Windy and Warm.” I offer two recordings, one live version with the back story offered by the song’s composer, John D. Loudermilk, and the original 1961 recording by […]

Yes, I have always come to the crucifix to pray,
But I never knew Jesus Christ and His love until to-day,
I sought by the feeble ray of the dim light of my mind;
But now it is dark, I learn by touch as they do who are blind.
I feel the pulse of infinite love beat feebly like my own,
And the heart of God confined in space to a little cage of bone.

The whole neighborhood is home and the grills are going. I sniff the air like Yogi Bear and start pulling things out of the freezer to grill for the week. My cousin from Vegas called to check on us. She is 10 years older and, if there was a liberal chart, she would fall off. We have been closer in touch since the passing of her sister, my other cousin, 15 years older, a couple of years ago. We don’t breach politics. We skirted the issue when she revealed her “psychotic event” when Trump was elected – sigh. So we keep it light. I love the sound of her melodic voice that reminds me of childhood.

She called yesterday and in our five-minute call, as I said we were on our way to pick up food, lamented that Las Vegas is a ghost town. It thrives on crowds — the Strip, gambling, sports events, concerts, conventions — now all gone. Then she suddenly began to rail on Trump, and how his “slow” response to the virus caused our current situation. I asked what about all the other world leaders and their responses? She said, but we are the greatest country, and he dismantled Obama’s emergency response team! I won’t go there but I dismissed it with, “Well, glad you are all ok, and can I call you back?” I don’t feel like calling her back.

I wrote this Saturday, and today is Palm Sunday. The whole world is experiencing Lent, like it or not. Lent is a time of reflection, remorse, a seat on a cliff in the desert, alone. It’s dry, prickly, and scary. Palm Sunday was mentioned by our Vice President, Mike Pence, in Saturday’s briefing. Before that, Dr. Fauci and President Trump, along with his Emergency Response team, gave a conference. It was encouraging. He takes his cues from his team, and gives not only information but whatever else is needed by our country’s governors.

I had a premonition this performance would not end well. It wasn’t because this was an impossibly big-and-spectacular Easter production that my relatively small-and-homespun church had been rehearsing for months. And it wasn’t because there were two smoke machines in the tomb that kept malfunctioning and the feathers on the angel wings refused to remain glued. No. It was because there was a live animal in the cast – and as the director, it would fall to me to … well … direct it.

Now everyone knows that one of the time-honored maxims of theatre is to never ever share a stage with a baby or an animal. Especially the latter. Animals are unpredictable, pose public hygiene challenges, and are perpetual scene-stealers. But the music director would not listen to any of my arguments and announced that this year Jesus would ride into Jerusalem during the Triumphal Entry song on a donkey. The pastor also thought it was a wonderful idea and read me the Scriptural account in Mark 11 of the “donkey colt that had never been ridden.”

“Don’t you think this will really bring the Bible to life?” he insisted. It’s hard to argue with your pastor when he’s quoting the Word of God. I sighed and relented. The donkey was in.

My husband and I had dog duty this weekend for a sweet couple that went out of town for an event. My husband designed the landscape at their beach home and I, for awhile, checked on their property on a regular basis. After the alarm went off when they failed to give me the constantly changing security […]

Helen: Rest of the Meme
Mark A., Dubious Authority · 27 Likes

Can we please have rainbow-colored Snow?
Michael G. Gallagher · 13 Likes