Jim Geraghty of National Review and Greg Corombos of Radio America cheer President Trump and other leaders in the western hemisphere for recognizing a new leader in Venezuela as the corrupt, socialist regime crumbles there.  Jim unloads on the media for often being more interested in generating outrage – and more clicks – than getting a story correct.  And they get a kick out of another obscure Democrat running for president and the DNC trying to plan for debates with 20 or more candidates.

All political media is rich with sources of outrage. It’s a constant drumbeat of people showing horrible behavior. Democrats and <insert Republicans I disagree with here> plan to do all kinds of evil. America’s enemies act blatantly, we have insane socialists with plans to destroy our way of life, and representative ready to nuke us. I’m vigilant and well aware of what is going down — I live in Obamastan, after all, surrounded by people who would despise me if they knew what I was.

Ben Shapiro had an interesting interview with Glenn Beck, who came across as more likable than I often find him. Perhaps it’s that he’s selling a new book. But a worthwhile conversation.

James Gunn, the screenwriter/director of the Guardians of the Galaxy films, was allegedly fired for morally reprehensible jokes he made almost a decade ago. Jokes he has apologized for. But Mike Cernovich dug up the tweety dirt on him and now he’s been canned. Before these events something else happened which may have figured into […]

People who shoot up schools are bad.  Why aren’t we saying so loudly and frequently?  Why aren’t their pictures in the paper with the word “LOSER” at the top of the page? However bad their situation, there are people in the same state or worse who do not descend to the degree of contemptible self […]

As long as there’s been an internet, there’s been outrage. Whether you hung out on an America Online channel, a CompuServe message forum, or alt.politics.usa.screaming.eagle, there was a market for yelling at anonymous strangers about the news of the day.

With the internet saturation provided by iPhones and social media, outrage is ubiquitous. People want attention and it’s easier to get it through anger than reason. But all this taking of offense is poisoning the public square, civil society, and all of our health (mental and physical).

Outrage is a substitute for religion: It convinces us that our existence has some kind of meaning or significance beyond itself, that is to say beyond the paltry flux of day-to-day existence, especially when that existence is a securely comfortable one. Therefore we go looking for things to be outraged about as anteaters look for ants. Of all emotions, outrage is not only one of the most pleasurable but also one of the most reliable.
— Theodore Dalrymple on outrage.

Filter the news through this quote. Every year around this time, Sweden celebrates the feast of Saint Lucia, a Christian martyr who according to legend brought aid to persecuted Christians in the dead of night, her head adorned by a candle-lit wreath. This is commemorated yearly by a reenactment, usually performed by children, carrying candles and singing Christian songs.

Most major Swedish companies do their best to capitalize on this cutesy tradition, but this year Åhlens, one of the largest department store-chains in the country, decided to go above and beyond the traditional and the ordinary. On the cover of the Christmas edition of their company magazine as well as their website, they chose to use a young black boy as the Lucia-model, dressed in the traditional gown and wreath, and the internet lost its collective mind. The comments ranged from “this is genocide on white people” and “A disgusting affront on Nordic tradition” to the more blunt “You make me puke.” Just a few days after the picture was published it had to be taken down after the boy’s mother asked the company to protect the boy from what ended up being a racist hate-storm.

The brunt of the criticism toward the company was focused on two factors: that there was a boy in a traditionally female role and that the boy was black, whereas the Swedish Lucia-procession traditionally features blond and blue-eyed children.

Jim Geraghty of National Review and Greg Corombos of Radio America discuss the fairly easy road to confirmation for the Trump cabinet thanks to Harry Reid’s nuclear option.  They also groan as the New York Times reports Pres. Obama plans to break from tradition and be a very vocal ex-president to keep the heat on Trump.  And they discuss the Hamilton kerfuffle and how only Pence ends up looking good. 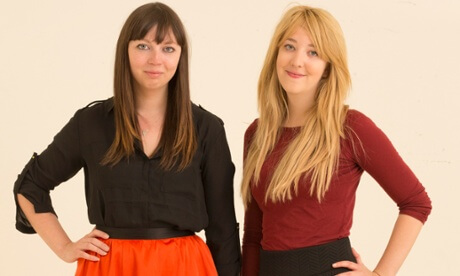 This, from the Guardian, must represent the hilarious nadir of modern feminism. Two women, both feminists, are photographed for a magazine. They are depicted with their hands on their hips.