Saturday night I put on my Sunday best and attended the midnight Easter liturgy at a Greek Orthodox church. A few thoughts: Following along the service was not easy. By bad luck, I ended up in the front pew, so I had to do more side-glancing to keep track of what to do. The congregation […] 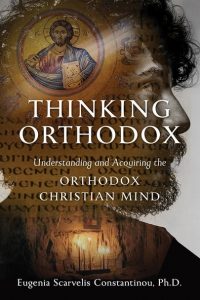 “What truly makes Orthodox Christianity different? Is it simply that we do not have a pope? That we preserve ancient liturgical forms and rituals? That married men can be priests?
The question does not lend itself to a simple answer because the reality is complex. In fact, the essence of Orthodox uniqueness lies far beyond these fundamentals… It is hidden, subtle, deeper than the outward forms, customs, or specific theological beliefs that manifest the divergence. The Orthodox phronema (“mentality,” “stance,” or “approach”) is the foundation of Orthodox Christianity. It is usually unexpressed and unexamined, and rarely discussed, but it affects not simply what we believe and why but — above all else — how we think.”⁠1

The book is guide to understanding how the very culture we live in is imbued with a mindset (a phronema, to use the Greek idiom the author introduces) and spirit that is very often hostile to, or at least at odds with Orthodox Christianity. Even Western Christianity, in both its Catholic and Protestent forms, has a very different mindset. In this the book is a valuable guide for converts, inquirers, and even cradle-Orthodox who may not be aware how different that understanding is. But the book is of great value even for non-Orthodox Christians, for much of it is a guide for our times, where Christianity is in retreat, and where the internet can deceive us all into thinking ourselves experts after half an hour on Wikipedia, or lure us towards extremists and zealots who seek division. Much of Dr. Constantinou’s book should indeed be read by all Christians who could find themselves arguing theology with strangers through a keyboard. Sunday was the Feast of the Presentation, when Christians recall the day Joseph and Mary presented the baby Jesus at the temple, offering Him back to God the Father. It is a mystery, like so many others, in which Christ in a sense returns home.

We do not belong to ourselves. Though so many choices are afforded to us to shape our own lives, our lives ultimately belong to our Creator. Our children are gifts for us to steward on His behalf. All of our many gifts are for giving again, including the gift of life itself.

Sunday also was Candlemas, a celebration adopted from the Eastern tradition involving blessing of candles. Christians, let us continue to explore the boundaries of orthodoxy.  Today’s topic is sexual immorality.  Exodus 20: 14 “You shall not commit adultery. Preview Open

Here again is a post in my series on the Ten Commandments.  Let’s look at Exodus 20: 13 Thou shalt not kill. Preview Open

Item: three months ago, my teen son announced he was converting to Catholicism. (We’re Lutheran.) We let him attend Sunday mass once and the issue seems to have died down. Item: one of my favorite podcasts is the Sci-Fi Christian. Co-host Ben De Bono is an Evangelical convert to Catholicism. Ben’s recent defense of the […]

The historic Manhattan cathedral that was gutted in a massive fire was one of four Christian Orthodox churches to go up in flames on Orthodox Easter Sunday — sparking fears of a coordinated attack on the religion. While FDNY officials said the blaze at the Serbian Orthodox Cathedral of St. Sava on West 25th Street […]