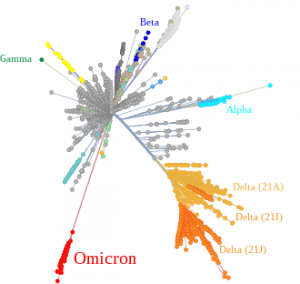 Omicron variant and other major or previous variants of concern of SARS-CoV-2 depicted in a tree scaled radially by genetic distance, derived from Nextstrain on 1 December 2021 (Wikipedia)

Now that the full sequence of Omicron has become known it’s remarkable to see how different Omicron is from all the other SARS-CoV-2 variants. It did not arise as a simple mutation of the others, it’s different in several ways. It has 60 RNA mutations causing 36 amino acid changes, several in the all-important spike protein. In a radial graph of genetic distance Omicron forms its own group way off to the side of the other variants (see diagram).

Joe Selvaggi talks with Alva10 CEO and precision medicine expert Hannah Mamuszka about which tests are best for determining who is contagious and the implications for the CDC’s new isolation recommendations.

We all know that the xi variant of covid-19 was notoriously skipped by WHO because it is a common surname. But how common is it really? And would it really be confused with a common surname? Curious minds want to know. Preview Open

The Georgia Center for Opportunity (GCO), where I work, has released a new report linking the number of jobs lost in a given state with how severely that state shut down its economy due to the COVID-19 pandemic. The study, entitled “State Pandemic Response:Understanding the Impact On Employment & Work,” also found that states that […]

Jim and Greg cheer the bipartisan congressional delegation that defied Chinese demands not to visit Taiwan. They also react to the news that actor Matthew McConaughey will not run for governor in Texas. And they groan as the World Health Organization skips a letter of the Greek alphabet in naming the new COVID variant so it would not offend China.