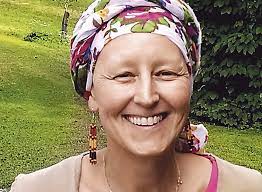 I’d never heard of this beautiful woman until a story was posted about her recent death at the young age of 51 from cancer.  I was so moved by the post, however, because it described someone who was so full of peace and light as she approached death, that all who kept a vigil with her were astonished.  Their description of Marie was so moving and as I read, something unexpected happened to me.

I was only halfway through the post and paused for a minute to absorb the descriptions of her life and her writings, when a difficult problem that I have been trying to work out for a long time with not much success, popped into my mind.   I had not been thinking about it while reading at all, yet two answers, simple and very clear, came to me regarding my problem.

So I was not thinking about it, and there is no way the two answers I received would have ever entered my mind, as they were the opposite of what I had been thinking while working through on my own.  Things like this don’t happen to me. I have no explanation for it, but I felt an immense sense of relief and clarity that I had not had before, and it has stayed with me.

Leading men and women is interesting and challenging and I can’t wait to tell you about my experience.  First let me get to some ground rules.  I am a Christians and all the leadership roles I have been in or religious in character.  Second while some things are generally true about men and women […]

A Self-Check on Intellectual Honesty and Consistency: Where Were You When Tyranny Flexed Its Muscle?
philo · 37 Likes