Join Jim and Greg as they start the day with some encouraging news about Buffalo Bills defensive back Damar Hamlin and his recovery from cardiac arrest. Then they welcome the news that lockstep liberal Democrat Sen. Debbie Stabenow of Michigan will not run for re-election in 2024 and discuss what that open race might look like. They also discuss Day 3 of the stalemate over who will be the next Speaker of the House and point out that some opponents of Kevin McCarthy have principled reasons for withholding support while others just seem to enjoy the political theater. Finally, they sigh as incoming California Rep. Robert Garcia plans to be sworn in on a copy of the first-ever issue of the Superman comic book.

Like many of you, I have been reading the polling data — and I am confused . . . in part because the pollsters are no longer able to gather the data requisite for a representative sample (thanks to the abandonment of land lines for cell phones), in part because nearly all of the so-called “independent” pollsters are partisan manipulators. So, I will have to wait for the results on Tuesday night.

I will be watching Michigan, as you should. It is a purple state. Trump won it in 2016. Biden was awarded it in 2020. The Democrats’ gruesome threesome is up for re-election: our governor, our attorney general, and our secretary of state. All three are female. All three regard abortion as a sacrament and care very little about anything else. They represent better than any other candidates in the country a certain propensity within the Democratic Party. There is also a proposition on the ballot to make abortion a constitutional right for all individuals (including your fourteen-year-old daughter, if you have one). It would also legitimate a sex-change operation for one of your children without your permission. Bodily autonomy — that’s the ticket.

Greg is back! Join Jim and Greg as they welcome news that the Michigan governor’s race is a dead heat and one of the worst governors in the country could be in big trouble. They also cringe as national math and reading testing shows horrific numbers that are clearly a result of schools being closed – many of them much longer than necessary. And they react to reports that Russia’s defense minister was discussing the threat of a Ukrainian “dirty bomb” that most in the west see as nothing more than a manufactured pretext for Moscow to use nukes.

Join Jim and Greg as they call out President Biden for his tired act of blaming Russian President Vladimir Putin for our inflation crisis. The war has contributed to the problem, but it was never the main driver of inflation. They also chronicle how Biden is about to completely flip from vowing to make Saudi Arabia a pariah state to begging it to produce more oil. And they shake their heads as two of Michigan’s most prominent GOP candidates for governor fail to make the primary ballot over fraudulent petitions.

Hey, you know how some people refer to public schools as “government schools” and say that their mission isn’t really education, but social indoctrination and enforcing social conformity? And how other people say, “That’s kook talk. Get away from me, you kook! With your crazy kook talk.” Well, the Democrat Party of Michigan has firmly weighed in on the side of the kooks. 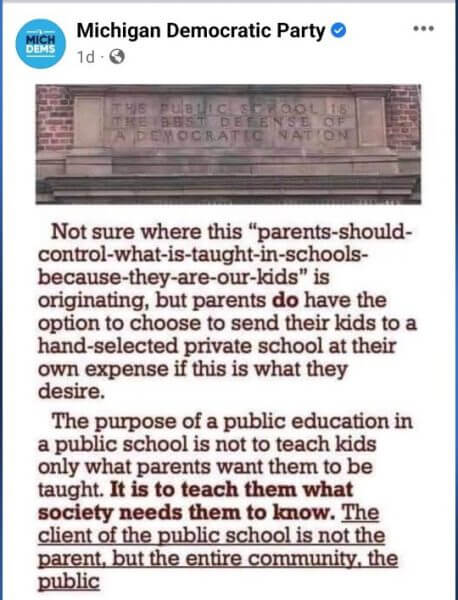 First Journey The red sedan carries me through the post-apocalyptic streets alone, running stop lights with impunity. My eyes and heart jump at motion caught in a side-glance. But it’s just the drive to work. Preview Open

Below are pleas from three nurses in Michigan–I got these from a Facebook friend that I respect. The first two posts are from fellow nurses she quoted, and the last post is from her.  These women are in the thick of this battle, so they witness things that most of us don’t see. Their perspective […]

Join Jim and Greg as they shred the blatantly partisan attempt by congressional Democrats to add four more seats (meaning lefties) to the U.S. Supreme Court but welcome House Speaker Nancy Pelosi announcing she has “no plans” to bring the bill up for a vote. They also react to the new polling showing a sharp drop in public confidence in the Johnson & Johnson COVID vaccine since the FDA ordered a pause this week. And they examine how Michigan’s COVID numbers are very high but interest in the vaccine is quite low.

Join Jim and Greg as they serve up three crazy martinis. First, they look at Michigan’s terrible COVID numbers and discuss why Gov. Whitmer is asking but not mandating that high schools suspend sports and in-person classes. They also groan as President Biden sets up his special commission to consider changes to the Supreme Court, including the number of justices and how long they should be able to serve. And they’re glad to see all the real problems in the world must be solved since CNN is busy declaring Asian font to be racist.

Ned Staebler makes his case for the decision to certify the votes in Wayne County, Michigan. Welcome to the future. Preview Open