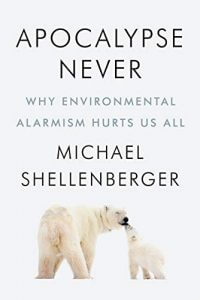 What follows is about an encounter on Facebook, or Meta. I don’t know which for sure, as it happened in the transition so I can’t say where it landed. So far, all my FB icons remain the same, untouched by the mind of Zuckerberg.

I have been reading a couple of books of apostasy, they being Apocalypse Never, by Michael Shellenberger, and Unsettled? What Climate Science Tells Us, What it Doesn’t, and Why It Matters, by Steven E. Koonin. I have been drawn to them in part to test my own skepticism, and to learn why they had jumped ship.

Briefly, both are still convinced that there is indeed climate change characterized by a small increase in global temperature. What they both reject is the proposition that this increase will be catastrophic in the near future and is an existential threat. They differ on possible resolutions of this “crisis”. From the Police Blotter: You Should Have Taken A Knee
Doug Watt · 13 Likes