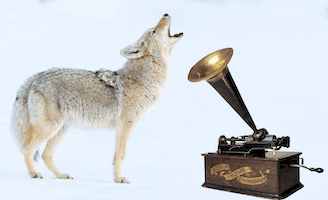 Are leftist “blue check” verified Twitter users really that ignorant or arrogantly gaslighting all the rest of us? I am prepared to embrace the power of “and,” but the overnight reaction to President Trump calling out Biden and the Democrats on illegal immigration reinforces the evidence of two Americas in one country. Indeed, there may be many for whom “coyote” is a wily cartoon character and maybe a hip song by Joni Mitchell, but nothing more. That divide is part of a larger global compartmentalization, written on in the late 1990s, that has been greatly reinforced and accelerated by the rise of social media platforms. As the weekend starts, I offer a few thoughts on the divide and a short playlist to entertain and perhaps enlighten.

President Trump told the hard truth that human traffickers bring children across the US-Mexico border without their parents. These children, like the women, are vulnerable to rape and sale into sex slavery, and yet some women rent their children near the border as a dodge to keep adults from being easily returned by the Border Patrol. Everyone in the American Southwest and Mexico knows the men who actually smuggle humans across the border are called “coyotes.” The pronunciation is different depending on your native tongue, but the word is the same. The term has never been a good one.

The native cultures’ oral traditions have coyote as a trickster in their tales. This image holds true for the human variant, who promise much but often underdeliver or betray those who paid them to guide and smuggle them across the border. Yes, even the New York Times recognized that in a 2018 story on illegal immigration. In early October, news broke that Maricopa County Assessor Paul D Peterson had been indicted in a massive adoption and immigration fraud case. As the state and local government cast about for a legal way to remove this elected official from his office, I quickly captured his official biography.* He brazenly touted his adoption activities, apparently secure in his status as a fifth generation Arizonan and a staunch member of the Republican establishment.