Jack goes solo again to ruminate upon the best movies, songs, and things about Christmas. 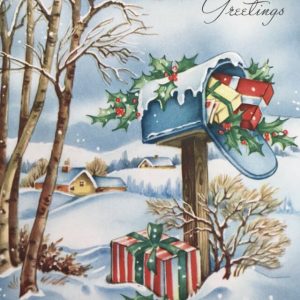 My cousin’s Christmas newsletter came back marked “no such address” in spite of the fact that she lived in the same house for 28 years. When I texted her about it she said just to email her a copy.

She had to ask me twice, maybe three times because of an internal, visceral reaction – kind of like years ago when I was in China and they said it is OK to spit the bones onto the plastic table cloth.  Even after sending her the pdf, I popped another paper version in the mail.

Our Christmas newsletter tradition began when we were first married.  We were in the “one true church” and one of their distinctive was that they didn’t believe in Christmas – pagan holiday and all that and Jeremiah warns us that worshiping Christmas trees is vain (well, sort of, but not really).

This year almost everyone in our little ‘hood has gone above and beyond with Christmas lights and decorations. I’ve posted some of my son-in-law’s efforts before; he did a light show at our home for the past two Christmases and another that was COVID-themed back in the spring.

Please click on the link below. Merry Christmas! Preview Open The Magnificat (Latin for “[My soul] magnifies [the Lord]”) is a canticle, also known as the Song of Mary, the Canticle of Mary and, in the Byzantine tradition, the Ode of the Theotokos. It is traditionally incorporated into the liturgical services of the Catholic Church (at vespers) and of the Eastern Orthodox churches (at the morning services). It is one of the eight most ancient Christian hymns and perhaps the earliest Marian hymn. Its name comes from the incipit of the Latin version of the canticle’s text. The Magnificat, taken from Luke’s Gospel -1:46-55

My soul magnifies the Lord
And my spirit rejoices in God my Savior;
Because He has regarded the lowliness of His handmaid;
For behold, henceforth all generations shall call me blessed;
Because He who is mighty has done great things for me,
and holy is His name;
And His mercy is from generation to generation
on those who fear Him.
He has shown might with His arm,
He has scattered the proud in the conceit of their heart.
He has put down the mighty from their thrones,
and has exalted the lowly.
He has filled the hungry with good things,
and the rich He has sent away empty.
He has given help to Israel, his servant, mindful of His mercy
Even as he spoke to our fathers, to Abraham and to his posterity forever.

Courtesy of Al Gorithm over at “You” Tube:

Oh, nice. You and Gorsuch.

Someone suggested in a recent post that if everyone that voted in the last election, donated $5.00 to the Trump re-election campaign, it would not only raise funds, but it is a show of solidarity with the President and a thumb in the eye to this impeachment mess. I thought it was a great idea […]

Earlier this December, Kansas City set a new Guinness world record for the largest tuba ensemble — 835 tubas (and euphoniums — they count, too) playing “Silent Night” at the Municipal Arena at Municipal Auditorium. The Kansas City Symphony had decided to host a TubaChristmas — and they wanted to make it a big one, for a really loud “Silent Night”. Jim Geraghty of National Review and Greg Corombos of Radio America shudder at the attempted terrorist attack in New York City but are glad this particular ISIS sympathizer only injured himself.  They also slam CNN for not only failing to verify the information from its sources in its supposed Wikileaks bombshell but for failing to be the first to correct its mistakes and then saying its reporters did everything right.  And they roll their eyes as leftists get bent out of shape because U.S. Ambassador to the United Nations Nikki Haley wished CNN’s Jake Tapper, who is Jewish, a Merry Christmas.