Today is the Feast of the Martyrdom of Saint John the Baptist, and so today we will look at how John was portrayed in three movies of some renown. To introduce our subject, I provide the summary from the Gospel of Mark, chapter 6, all quotes from the ESV translation: 14 King Herod heard of […] 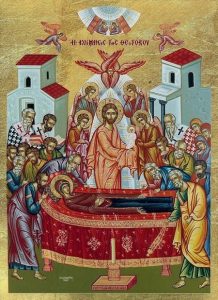 “Sing aloud, O daughter of Zion; shout, O Israel! Rejoice and exult with all your heart, O daughter of Jerusalem!” (Zeph 3:14). Today marks the day Mary visited her cousin Elizabeth. Upon hearing Mary’s greeting, Elizabeth – filled with the Holy Spirit, proclaimed, “Blessed are you among women, and blessed is the fruit of your […]

In 1854, Pope Pius IX, exercising his office, solemnly proclaimed and defined the dogma that the most Blessed Virgin Mary, in the first instance of her conception, by a singular grace and privilege granted by Almighty God, in view of the merits of Jesus Christ, the Savior of the human race, was preserved free from all […]

I love reading this every year during Advent. Arise, hasten, open. We too are waiting, O Lady. Second reading Preview Open

Today, December 8, the Church celebrates the Solemnity of the Immaculate Conception, the solemn dogma declared infallibly by Pope Pius IX on December 8, 1854, in his Apostolic Constitution Ineffabilis Deus, that Mary was conceived without the stain of original sin. We declare, pronounce, and define that the doctrine which holds that the most Blessed Virgin Mary, […]

A brief re-telling of the Annunciation A raw March wind blows in from the sea, combing the grasses on the dunes, tumbling over the warmth still left in the sand from a sun now long set, dispersing its stony, desert smell. Preview Open

The movie 13 Hours opens this weekend, prompting this comment on Wednesday’s The Rush Limbaugh Show: