Join Jim and Greg as they assess Rep. Liz Cheney getting trounced in the Wyoming congressional primary, her odd Lincoln reference in her speech last night, and whether she is really planning to run for president in 2024. They also shake their heads as the political left and their media allies drop the bogus talking point that their massive spending bill reduces inflation and admit it’s just advancing their big government goals on climate policy and more. And they hammer Washington, D.C. Mayor Muriel Bowser for continuing to demand that all students be vaccinated for COVID before being allowed in schools when up to 40 percent of black students remain unvaccinated.

Join Jim and Greg as they give a shout out to the 50,000 Canadian truckers bringing their convoy to Ottawa to fight against their government’s vaccine mandate that’s threatening their livelihoods. They also shake their heads as now President Biden and Ukrainian President Zelensky are at odds on when to expect a Russian invasion, whether the U.S. is sending the military aid Ukraine actually needs and more. And they’re curious at Biden’s timetable for announcing a Supreme Court nominee and the left’s overreaction to criticism that Biden is prioritizing the wrong criteria in his search. 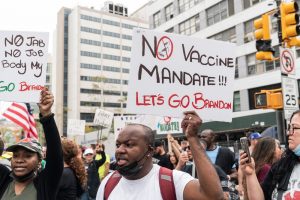 On Friday, January 7, the United States Supreme Court will hear argument on one of the most contentious cases of modern times: National Federation of Independent Business v. Department of Labor, which addresses the question of whether the plaintiffs are entitled to a stay of legal proceedings until the legality of a federal vaccination mandate can be authoritatively resolved on the merits.

COVID-19 policymaking has been at the center of attention in the United States since early 2020. Over the past two years, the cases, hospitalizations, injuries, and deaths have had multiple cycles with no clear end in sight. By the end of 2020, a number of different vaccines had become available to prevent the disease. Two of these, the Pfizer and Moderna vaccines, rely on a new mRNA technology. With great expectations, both of these were approved by the Food and Drug Administration last summer, a step taken only when the FDA determines that vaccines (or other drugs or medical devices) “meet the FDA’s rigorous scientific standards.” The FDA also continuously updates its recommendations for approved booster shots for COVID. The work of the FDA has been complemented by that of the Centers for Disease Control and Prevention (CDC), which as of December 29 had adopted a categorical position of recommending that all individuals get their initial or booster shots of the vaccines as soon as possible.

You may want an actual martini as you join Jim and Greg for three troubling stories. First, they chronicle the rapid collapse of the Afghan military, the Taliban’s seemingly inevitable return to power, and the Biden administration’s recent assurance that this would never happen. They also fume at the lack of any coherent Biden border policy as more than 212,000 migrants were apprehended at our southern border in July. And they unload on the president following reports that the Biden administration has considered draconian COVID restrictions, including the need to prove you are vaccinated to cross state lines.

Join Jim and Greg as they comment on the moments from Wednesday’s impeachment votes that stand out to them, including House Speaker Nancy Pelosi having to enforce her no gloating policy. Then they dive into three crazy martinis, starting with Pelosi saying she won’t pass the impeachment articles along to the Senate unless she’s convinced it will be a fair process. They scratch their heads as Tulsi Gabbard votes present on both articles of impeachment and wonder what her political future holds. And they dissect the 5th Circuit Court of Appeals declaring the individual mandate unconstitutional and Jim wonders whether Republicans would have any legislation ready to go if the Supreme Court were to strike down all of Obamacare.

Now that the new Congress has been installed and the inauguration of Donald J. Trump as the 45th President of the United States looms around the corner, the new favorite buzzword that has surfaced everywhere is “mandate.” No, it’s not about an internet matchmaking site or even good looking but pathetic people who to seek love and attention on a television “reality” show.

It is just the quadrennial revival of the winners and the losers flinging about the word like so much verbal monkey poo to justify their existence. The losers are more vocal about it than the winners, of course. For every proposal made, for every policy hinted at, the losers (in this case, the Democrats) hurl their “no mandate” poo at every available microphone, camera, Twitter account, or old lady writing out her grocery list. And, just to top it off, they add a smattering of “overreach.”

So, what exactly is a “mandate?” I’m no constitutional lawyer (although I have a nifty Law School tee from a certain right-of-center website and podcast) but I can’t find the provision or Supreme Court decision that defines the sliding scale of power assigned to the President and/or Congress based on the margin of victory in the election. As far as I can tell, any margin at or greater than 1 gives you the same amount of power. You still have to count the votes and calculate the political risks but there doesn’t seem to be a limitation that can be assigned in any shape, manner, or form by the opposing party.