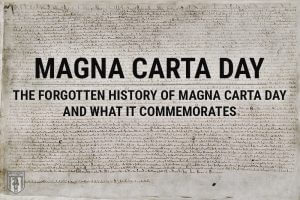 June 15th is Magna Carta Day. While this doesn’t have the same cachet as Memorial Day or the Fourth of July, the history of the Magna Carta is arguably far more important. A number of the rights codified in the Constitution’s Bill of Rights find their origins in the Magna Carta. The charter was drafted by the Archbishop of Canterbury as a way to settle tensions between the King of England and some of his barons.

The Magna Carta is the foundation of the Western conception of individual liberties, particularly in the Anglosphere. It is also one of the most mythologized documents in history. Still, many today are unaware of its actual content and the historical context in which it was drafted.

The Origins of the Magna Carta

While much of the historical context is complex, the main point is this: Under the rule of King John in the 13th century, several barons were unhappy with the nebulous nature of rule and administration. The Magna Carta was an attempt to codify the procedures by which the King ruled over his subjects, in particular the barons. The “Great Charter” was renewed by subsequent kings, though under parliamentary rule, much of its main provisions were slowly stripped away. Recently I wrote a post decrying the fecklessness of conservatives, Republicans, and their constituents. We expended a great deal of energy in the comments figuring out how we could fight back against the Democrat party, re-build our reputations by challenging the lies and deceptions of the Left, and gain the respect and trust of the electorate. I think I have identified an additional strategy for this new agenda that we haven’t previously touched on. It’s called the rule of law.

The term “rule of law” has been bandied about quite a lot lately. Most people probably don’t know what it means, but it sounds important and official. The problem in these times is that rule of law is ignored when it is inconvenient, difficult, or an impediment to action. Yet at one time, rule of law was an important governing principle.

Just in case anyone was toying with the idea of attending the KC meetup, but didn’t know how they were going to get there. I’m planning on driving from Chicagoland to KC.  And if possible, I might take it a Cardinals vs. Royals Game game on the way there or back,  not sure, no real […]

Of course you would.  How could anyone not want to spend time with the National Review writer,  author of The Conservatarian Manifesto, and a strong advocate for free speech and Second Amendment rights?The most attractive conservative alive? Women love him; men want to be him. Preview Open June 15 marks 800 years since the signing of the Magna Carta, one of the most important documents in history. In honor of the fellow at the right agreeing to respect his noblemen: Mr. Amy, James of England, and I are hosting a Ricochet Meetup in Kansas City!

This June has a number of anniversaries of important events in the spread of freedom and American identity at 25, 50, 100, 200, 400, 1600, 3200, and 6400 years ago. We assume that everyone will be celebrating 800 years of the Magna Carta, so we’re not trying to compete on the day; we’re taking the closest weekend. The Waterloo celebration later in the week may mean that you’re already partied out that week; if so, we understand, just as those of you who get to celebrate the Berlin Wall finally falling to Peter’s words have a great reason not to attend other, inferior parties. An informal poll, though, suggests that few of you are celebrating the 400 years since Pocahontas gave birth to a founding father of Virginia (and James would like to suggest there is nothing more pro-freedom than marrying an Englishman). Come celebrate the invention of beer, or any of the other anniversaries, but more importantly, come and celebrate Ricochet. A meetup where we have coffee really is like having coffee with friends.

On June 13th, we will be at Penn Valley Park in beautiful midtown Kansas City. After a recitation of the Magna Carta’s text — it’s not much longer than the Declaration of Independence — under a garden of memorial oak trees, we will tour Liberty Memorial and WWI museum. Afterwards, we’ll have a delightful picnic at the shelter and fun in the sun in one of Kansas City’s great parks.

The ‘Big One’ and the Pacific Northwest
GrannyDude · 24 Likes

The Hopes of a Mother to Her Son
JennaStocker · 18 Likes