I opposed Trump during the 2016 primaries because of my conservative principles. Why? I thought he would violate them. Almost all of them. I thought Trump was a lefty who would pull a Schwarzenegger on us as soon as pressure was applied. I voted for Trump in the 2016 general election, because of the alternative, […]

Okay, there’s been a lotta Liz Cheney back and forth lo these last few days. Some fer, some agin’. A lot of Ricochet rancor back and forth in the comments. People getting all riled. But I want to take this outside the universe we live in, to a parallel world, much like our own., but […]

Liz Cheney reminds us once again that she literally sacrificed everything to save America from being made great again because she’s just like Abraham Lincoln.

Two years ago, I won with 73% of the vote. I could easily have done so again. But it would have required that I go along with Trump’s lies about the 2020 election. That was a path I would not take. No House seat is more important than the principles we are all sworn to protect.

No shortage of ink spilled across newsrooms to explain Tuesday’s merciless dethroning of Liz Cheney as the GOP nominee for the Cowboy State’s lone congressional seat.

Let me begin by congratulating Harriet Hageman for her victory yesterday. I hope she wins in November and represents Wyoming and America well during her tenure in Congress.

The best thing to come out of our two years with COVID is a general and growing skepticism of “experts.” We’ve been lied to, ineptly led, treated like children, ignored, censored, and told what’s good for us by people who think they know better than we do what’s good for us.

Join Jim and Greg as they assess Rep. Liz Cheney getting trounced in the Wyoming congressional primary, her odd Lincoln reference in her speech last night, and whether she is really planning to run for president in 2024. They also shake their heads as the political left and their media allies drop the bogus talking point that their massive spending bill reduces inflation and admit it’s just advancing their big government goals on climate policy and more. And they hammer Washington, D.C. Mayor Muriel Bowser for continuing to demand that all students be vaccinated for COVID before being allowed in schools when up to 40 percent of black students remain unvaccinated.

According to Decision Desk, Cheney has  lost her primary – and not by a small amount. It was called less than thirty minutes after the polls closed. Preview Open

Liz Cheney (R?-WY?) or her junior staffer who runs the Twitter account, had this to say this morning.

The House GOP leadership has enabled white nationalism, white supremacy, and anti-semitism. History has taught us that what begins with words ends in far worse. @GOP leaders must renounce and reject these views and those who hold them.

Senator Pierre Delecto is chagrined that Republicans like Josh Hawley and Ted Cruz are forcing Democrats to defend light sentences for pedophiles.

Sen. Mitt Romney (R-UT) reportedly believes it is “off course” for Republicans to attack Biden Supreme Court nominee Ketanji Brown Jackson for giving out lenient sentences to those in possession of child pornography.

A Who’s-Whom of Bush-Republicans is holding a fundraiser to help Wyoming Congresswoman Liz Cheney fend off a primary challenge from a conservative challenger who will vote the same as Cheney but probably won’t sign onto one of Nancy Pelosi’s January 6th Show Trials. The fundraiser will be held in Cheney’s hometown of McLean, VA, and will feature Utah Senator Pierre Delecto. The guest list is an epic networking opportunity of globalists, neoconservatives, and people who still think the War in Afghanistan was a good idea.

New York Times columnist Thomas Friedman (not to be confused with the NYTimes columnist who wants to be Governor of Oregon because he thinks the current governor isn’t left-wing enough) thinks Biden should pick Liz Cheney as his running mate in 2024.

His rationale … I am not making this up… is because Israel is a parliamentary democracy and Orange Man Bad, and therefore, combining a president with a 28% approval rating with a vice president so consumed with hatred for the previous president that her own party has rejected her will unite the country and save democracy. 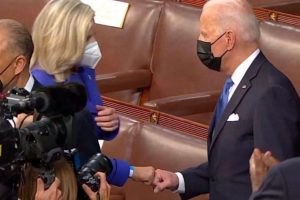 Join Jim and Greg as they enjoy watching the Dems’ case for killing the filibuster wither away. They also discuss the House GOP fight over Conference Chairwoman Liz Cheney and the impact it’s having on the party. And they shake their heads as Brookline, Massachusetts, insists on requiring masks outside despite he CDC easing those restrictions.