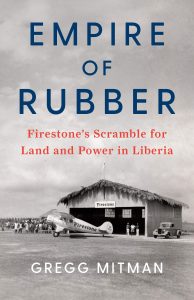 In the first decades of the 20th century, rubber changed from a material that was a sometime useful curiosity into a vital strategic asset. This was especially true in the heavily-industrialized United States, with a massive demand for rubber in both transportation and industry.  The problem was the United States controlled no sources of rubber. Every pound came from foreign countries or colonies controlled by foreign countries.

“Empire of Rubber: Firestone’s Scramble for Land and Power in Liberia,” by Greg Mitmann tells of one US attempt to circumvent that shortfall. It relates how Firestone, a US company, with the support of the US government established and ran rubber plantations in Liberia between the 1920s and the 1980s.

Following Minister Werner’s remarks, panel of experts on education in the developing world discusses the implications of the PSL program. Alejandro Caballero of the International Finance Corporation states that private operators could provide substantial benefits to developing world schools. Amy Black of Results for Development stresses the importance of the government’s role in partnerships between public and private schools. Seth Andrew of Democracy Builders and Bridge International Academies believes that delaying the expansion of the model to analyze the program results, though understandable, would hurt students who are in failing schools.

We were living in the UK. The Big Man’s orders said that we would be moving to Jakarta, come the summer. I read up on Jakarta, I was totally stoked. On 01 April the Big Man got a call (while he was in the rack. Shift work). Some poor jamoche in some faraway hell-hole had dropped dead from a heart attack. He couldn’t fill (obviously) his follow-on billet. There was a ripple effect across the entire organization. The result was we were no longer going to Jakarta, Indonesia. We were going to Monrovia, Liberia. “Yeah, April Fool’s to you too, [expletive],” said the Big Man. Then he rolled over and went back to sleep. It wasn’t a joke.

Eleven days later, Master Sergeant Samuel K. Doe led one of the bloodiest coups (up to that time) in African history, and took over. Won’t go into the 5Ws of the coup, but it was bloody and the body count was extravagant.