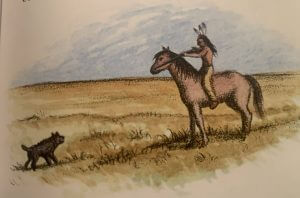 I mean, thanks so much for dinner last night, @philturmel! Almanzo sat on a footstool by the stove, an apple in his hand, a bowl of popcorn by his side, and his mug of cider on the hearth by his feet. He bit the juicy apple, then he ate some popcorn, then he took a […] Christmas is now less than two weeks away. I have another quote about the Christmas season today. A quick short one, and I offer no further commentary. Our hearts grow tender with childhood memories and love of kindred, and we are better throughout the year for having, in spirit, become a child again at Christmastime. […]

The thunderstorm came on slowly from the north.  We watched the clouds flash and pulse and felt the distant rumbles of the storm.  As it neared the wind picked up, first to a warm breeze, then to a cooler insistent push.  It was time to go in.  We kept the windows open for the time, […]