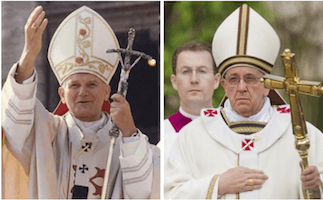 Pope Francis is no John Paul II. This past weekend, an image of Pope Francis with Nancy Pelosi called to mind a famous image of Pope John Paul II with a Nicaraguan priest and Daniel Ortega. Ernesto Cardenal was a Roman Catholic priest serving as the minister of culture in the Marxist government. He and the dictator in designer glasses, Daniel Ortega, expected a great visual as they welcomed the Pope on the tarmac. Nancy Pelosi expected the same from Pope Francis. History did not repeat itself, and this pope appears to be steadily undoing the work and teaching of his prominent predecessor.

Not only was Ernesto Cardenal wrapping up Marxism in priests’ robes, he was part of a small group of leftist clerics who were collaborating with Ortega in the Sandinista government’s suppression of the official Catholic leadership. Pope John Paul II invoked “dark ages,” referring to the anticlericalism of the Mexican Revolution and other leftist Latin American movements earlier in the 2oth century. In this context, John Paul confronted the errant priest and the priest’s real boss, the dictator in designer sunglasses.

When confronted with the subversion of sound Christian doctrine by socialists, appending “liberation” to “theology,” John Paul responded forcefully both in official writings and in his wise use of the media. He avoided giving the Sandinistas and their heretical pet priest a world media victory, instead generating an unmistakable photographic image of the Church rejecting liberation theology. Caring about a priest, or any other member of the body, who has persistently strayed and refuses correction, means more than another gentle conversation. For Catholics who advocate for free markets, Pope Francis has just made life extremely complicated. The Holy Father’s encyclical, Laudato Si’ — which I have only begun to read — contains statements that clearly indicate that the Pope has fallen in with the progressives. Although the encyclical still prohibits birth control, abortion, and euthanasia, Francis seems tone deaf to the constant demands of the left, particularly the environmental left, that the Church abandon her teachings and encourage the use of these prohibited techniques. The Pope also seems to have largely adopted the platform of the American Democratic Party. As a Republican, my stomach is queasy.

So what to do? As a Catholic, I must submit my personal convictions to the authority of the Magisterium– which means to the Pope insofar as he speaks within Church tradition on theological matters. That gives me some weasel room on Francis’s economic views. But not much room. A Catholic’s first duty is obedience, or as my daughter wrote in her new article for Catholic Exchange:

…our lives are not our own. They belong to God and that means a total emptying of self. It is within this framework that we will examine our call to love and submit in obedience to the hierarchical Church. In learning this obedience, we will mature and grow in our faith. Since Christ left us the Church, it is He who calls us to loving submission to the Church.