In a 2014 a16z podcast from the Andreessen Horowitz venture capital firm, economist Larry Summers clearly analyzed the inequality theories of Thomas Piketty, author of the best-selling Capital in the Twenty-First Century. While Summers thinks Piketty’s description of “what” is happening is important, he is skeptical of the “why” of perpetually rising wealth inequality — particularly Piketty’s assertions about rates of return on capital and savings. These are criticisms which many other economists have since offered and expanded upon. In a new Financial Times note, Larry Summers defends some key elements of Hillary Clinton’s “pro-worker” economic agenda: higher minimum wage, mandated family leave benefits, tax incentives to boost corporate profit sharing. Of course, since these agenda items come from a Clinton-aligned Center for American Progress report that Summers himself co-wrote, he is really just talking his own book. Not so interesting. But his counter-argument or addendum to Clinton’s “quarterly capitalism” or “short-termism” agenda is thought-provoking:

At the same time scepticism about whether all horizons should be lengthened is appropriate. A generation ago, the Japanese keiretsu system of cross ownership of corporate shares — which insulated corporate managements from share price pressure — was seen as a strength. Yet, Japan’s manifest macroeconomic difficulties aside, companies lacking market discipline have squandered leads in sectors from electronics to automobiles to IT.

Managements of companies that are dissipating the most value, such as General Motors before it was bailed out by the US government in 2009, have often been the most enthusiastic champions of long-termism. Market participants who are willingly placing high valuations on Silicon Valley start-ups that lack any profits and have little revenue may be putting too much, not too little, weight on the distant future. That, at least, is the implication of those who see the inflation of a “technology bubble”. Democrats often mock Republicans for having a one-track mind when its comes to economic policy. Here is a famous example, President Obama at the 2012 Democratic National Convention: “And that’s because all [Republicans] had to offer is the same prescription they’ve had for the last thirty years: Have a surplus? Try a tax cut. Deficit too high? Try another. Feel a cold coming on? Take two tax cuts, roll back some regulations, and call us in the morning.” I was there when Obama said that. It got a pretty big laugh.

Anyway, Republicans could make a similar charge about Democrats, substituting “infrastructure spending” for “tax cuts.” Among center-left economists, Larry Summer has perhaps been the most outspoken about how we should take advantage of low interest rates for needed public investment: “The single most important step the US government can take to reverse these discouraging trends is to mount a concerted, large-scale program directed at renewing our national infrastructure. At a time of unprecedented low interest rates and long-term unemployment, such a program is good economics but, more fundamentally, it is common sense.” 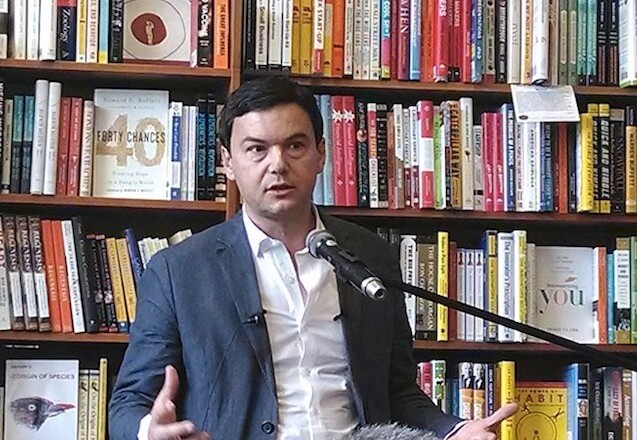 Is Thomas Piketty’s sprawling best-seller, Capital in the Twenty-First Century, really just a bit of dystopian, neo-Marxist, speculative fiction tarted up with dodgy math? Some free-market types who disagree with the French economist’s controversial analysis and policy prescriptions might like to think so.

But this would be a more reasonable and fair take: extraordinary claims require extraordinary evidence. And Piketty, at the very least, makes a bold claim when he asserts discovery of powerful forces inherent to capitalism driving an “endless inegalitarian spiral” of ever-greater wealth concentration. And he offers mounds of data as support.

What I Learned in my Due-Date Group (Also, I Had a Baby)
Vicryl Contessa · 45 Likes