Join Jim and Greg as they discuss the impact of Arizona Sen. Kyrsten Sinema leaving the Democratic Party and becoming an independent – both on the functioning of the Senate and the 2024 Senate race in Arizona. They also break down the reporting of Bari Weiss on how Twitter really was shadow banning  – or “visibility filtering”  – certain accounts on the right. And they discuss the bizarre case of the Biden administration’s non-binary nuclear waste expert being charged with another felony after a second case of stealing someone else’s luggage at the airport. 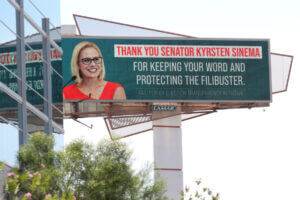 Yesterday, I opined on the latest idea percolating among US Senate Democrats to get their partisan power grab on steroids – federalizing election rules in apparent violation of the US Constitution – through the Senate and on the President’s desk.

They focused on what Senate insiders call the “two-speech rule,” limiting every Senator to speaking twice on any question during a legislative day.

Join Jim and Greg as they applaud Democratic Senators Kyrsten Sinema and Joe Manchin for refusing to eliminate or alter the filibuster despite massive pressure from their own party. They also welcome the Supreme Court’s decision striking down President Biden’s vaccine mandate on all businesses with more than 100 employees while also noting a separate decision that upheld the mandate on personnel at health care facilities. And they take a look at even more signs that Russia may be planning to invade Ukraine in the coming weeks. 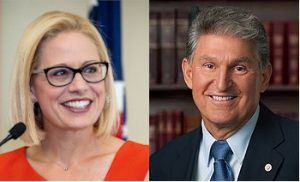 We’ve seen more double standards from our political elite over the past two years than the past 20 or more combined, from “rules for thee not for me” politicians like California Gov. Gavin Newsom (D-French Laundry) to President Joe Biden calling Georgia’s fair election reform laws “Jim Crow on steroids” while his home state of […]

The media seem to have lost their affection for maverick senators from Arizona who break with their own party. “Sinema Stars in Her Own Film” (Maureen Dowd, New York Times)  Somehow, we have gotten ourselves in a perverse situation where Sinema and Joe Manchin rule the world, and it’s confounding that these two people have […]

Join Jim and Greg as they applaud Arizona Sen. Kyrsten Sinema for staying consistent on her refusal to kill the filibuster, much to the dismay of her party. They also wince as the Taliban  regains control in much of Northern Afghanistan amid the withdrawal of American troops. They end their discussion by highlighting the voter ID flip-flopping of Georgia Sen. Raphael Warnock and other Democrats after years of calling the idea racist and tool for voter suppression.

Join Jim and Greg as they welcome Arizona Sen. Kyrsten Sinema cementing the end of any serious effort to kill the legislative filibuster. They also discuss the talk of a Patriot Party and why fighting out serious differences within one party is far preferable to a major split. And they marvel at Politico staffers continuing their hissy fit over their editors asking Ben Shapiro to write one thing two weeks ago.

Jon Gabriel: ‘Democrats Have Utterly Lost Their Minds’ and Arizona’s view of Senator Kyrsten Sinema. The Ricochet.com Editor in Chief and host of The Conservatarians joins Dave at Real Side Radio on Salem and GCN Radio Network.  Preview Open

Another day with two good martinis!  Join Jim and Greg as they celebrate U.S. forces killing another top ISIS official who may have been the successor to al-Baghdadi.  They’re also pleasantly surprised to see Arizona Democratic Sen. Kyrsten Sinema frustrating party leaders for taking a moderate approach on several issues and opposing an end to the legislative filibuster no matter which party is in control.  And while Jeff Sessions was a solid senator, they’re not too excited to hear Sessions is seriously considering joining a crowded field to win the seat again.